WALTHAM -- One of the most recognizable and beloved sights in the season of Advent is the creche, a depiction of the Nativity. And this year, St. Mary Parish in Waltham took this tradition to a new level by holding its first Nativity-making contest, engaging both parishioners and local businesses in making and displaying scenes of Christ's birth.

Father Michael Nolan, the pastor of St. Mary Parish, had the idea for the contest after visiting Assisi, the home of St. Francis, who began the tradition of creating Nativity scenes to contemplate Christ's birth.

"I could see the impact it had on the town, so I thought we should try doing something with Nativity scenes here," Father Nolan said.

For information about the Nativity, the contest rules directed potential contestants to the infancy narratives in the Gospels of Matthew and Luke, as well as Pope Francis' apostolic letter "Admirabile Signum," "On the Meaning and Importance of the Nativity Scene."

Awards were given out based on three categories: creativity, quality of craftsmanship, and theological and historical accuracy. A panel of judges awarded $1,200 in prize money, with several contestants on each prize tier. The three first-place prizes were $250 to the winner's charity of choice. The second- and third-place winners received gift cards.

From Dec. 8 through Jan. 8, the Nativities will be displayed in local businesses in Waltham. Father Nolan said this is a way to bring Christ to people who might not come into a church.

"This makes it simpler to propose Christ," he said.

Different groups within the parish contributed entries, such as the cantors, the charismatic group, and the after-school program. The parish also provided materials to students at Our Lady's Academy so they could draw or sculpt their own Nativities. Dios Provee y Amigos Choir created a large creche to represent the music they offer to God and the beauty of creation.

In all, 30 Nativities were submitted for the contest, while another 20 were made by students. About 100 sets from different countries around the world were also collected.

The 150 Nativities were displayed together in the church basement during the first weekend of Advent, Nov. 26-27. Many people came after Mass to look at them and vote on their favorite.

"It's so great to see all the excitement from people coming down after Mass to see all the creativity and the truth in all of these scenes," Deacon Paul Born, a seminarian assigned to the parish, said on Nov. 27.

The Nativity sets ranged in size, color, style, and building materials. Many contestants used standard art supplies -- among them clay, paper, plaster, wood, and papier-mache -- while others went in less traditional directions. A few children in the after-school program built scenes out of Legos. Other entries were made of shells, stuffed animals, or candy.

One longtime parishioner, Maria Gutierrez, put a personal spin on her Nativity set, which she made with help from her friends. One of them suggested that they set the scene in their own church. So, they constructed a model of St. Mary Church, along with surrounding streets and buildings. They crafted miniature figures of the parish clergy to be part of the Nativity scene.

Crystal Ravasi and Mary Anne Merola made the Nativity displayed in the upper church. Ravasi made the rock formation with spray foam, while Merola made the little houses, and Father Nolan supplied the figurines.

"It's a wonderful project for the whole church, all ages. And when (the Nativities go) out into the different businesses, it'll hopefully spread the word," Merola said after seeing them displayed on Nov. 27.

Deacon Born said the contest has been a way to unite the parishioners.

"Everyone in the parish, despite speaking three languages, and doing very different cultural things, and having different Mass times on Sunday, all unite through things like this," he said.

He noted that the readings for the first Sunday of Advent, calling for people to walk in the light and change their lives, "can be a scary prospect." However, "it shouldn't be scary if we know that it comes from a place of love and that the Christmas grace comes through a gentle baby."

"St. Francis' genius was to get people to love Christmas again through seeing the gentleness of the almighty God born as a baby," Deacon Born said.

He said they hope that the Nativity displays will inspire people "to think about the meaning of Christmas and the centrality of the manger."

He also expressed hope that the contest will become an annual event.

"More and more people will likely participate when they see what all these different people can create with just a little ingenuity and effort," he said. 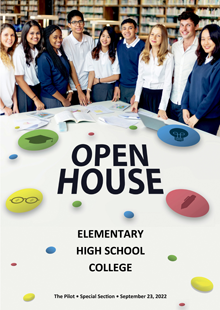