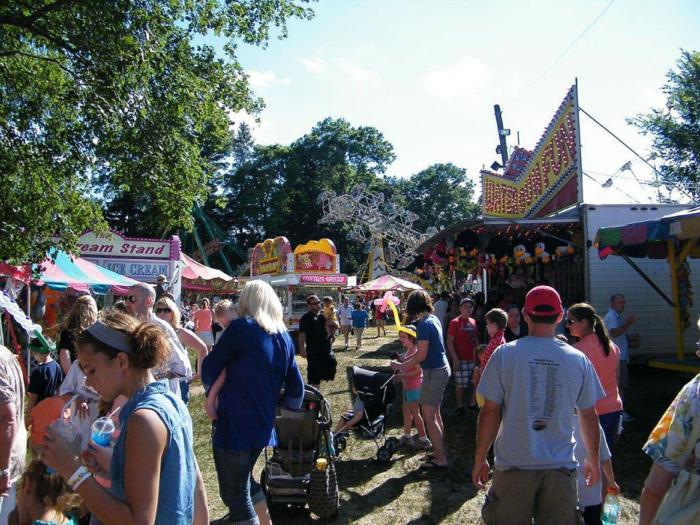 St. Mary Parish in Franklin's Feast of St. Rocco -- named for the patron saint of the sick -- will give people a chance to help someone with a grave illness through the parish's first annual bone marrow drive. Pilot photo/courtesy St. Mary Parish

FRANKLIN -- Thanks to the efforts of young-adult parishioners at St. Mary Parish in Franklin, parishioners will not only be able to enjoy themselves at the parish's annual St. Rocco Festival, they may also be able to help cure someone of a life-threatening disease, as well.

This year, along with the food and games, the parish will provide the opportunity for people to register as potential bone marrow donors.

The effort has its roots in 2010, after college-age parishioner Kristin Graci lost her battle with leukemia. Her brother, Justin Graci, was determined to fight back against the disease that took his sister from this world at a young age.

Friends at his college, UMass Amherst, rallied to support him in his grief, but also in running bone marrow drives in association with the national organization Delete Blood Cancer.

At an on-campus event called "Kristin's Celebration of Life" Justin Graci experienced his first bone marrow drive, and the school gained national recognition for their contribution.

"We have gone on to find 27 life-saving matches from our efforts," he told St. Mary's parish newsletter, The Weave.

This year, he and friends from Franklin and the parish plan to staff a booth at the St. Rocco's Festival, August 8 through 10, to promote the potential of saving a life through the Bone Marrow Registry.

"Actually, they're not kids. They're adults now," she added with a laugh.

Simply by giving a mouth swab, guests of the festival can participate.

Ross Tanner, another young member of the parish, had such a swab in 2013 at a drive at UMass.

"Little did I know that I would be called three months later and told that I was a potential match for a person with leukemia," he told the parish newsletter.

He said he is praying for the man who received the treatment.

The parish community hopes to add 2,000 names to the bone marrow registry with the drive during the festival named for a patron saint of the sick.

Born around the year 1340 in Montpellier, France, St. Rocco -- also known as St. Roch -- was orphaned as a young man. Soon afterward, he gave away all his property to the poor, took a vow of poverty and left on a pilgrimage to Rome. As he travelled through Italy, in each city he visited he devoted himself to caring for plague victims, healing them with prayer and the sign of the cross.

The festival began in Franklin amongst the Italian community under Father R. Michael Guarino, in 1979. The original celebration began with a procession from the church to the fields where the celebration was held.

"He started this to make a contribution to the parish as a community, that it would be a religious, social, and cultural event," Father Brian Manning, pastor of St. Mary's, said.

The opening Mass of the feast this year takes place on Aug. 3, before the rest of the celebration gets underway on Aug. 7 with the opening of the grounds that host the celebration's rides, food booths, and entertainment.

"The mission of the feast is to bring together people, to celebrate life, and to also acknowledge that people are ill and sick," he said.

A Mass for the anointing of the sick will be celebrated Aug. 9, with the closing Mass on Aug. 10.

Father Manning said having a bone marrow drive on the feast day for such a saint made perfect sense when parishioners proposed the idea.

"Healing and health has changed over time, and this is a wonderful way to participate in modern medicine and helping people to be healed," Father Manning added.