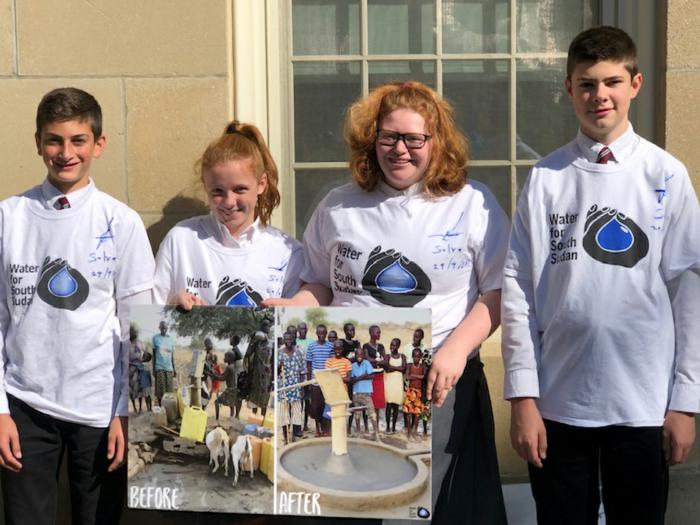 WAKEFIELD -- Raising money for charities is not a new activity at St. Joseph School, but its campaign to support Water for South Sudan was markedly different from any previous fundraising effort in that it was initiated and led by students.

St. Joseph School students Michael DeSimone of Stoneham, Courtney Fallon of Lynnfield, and Peter Swain of Wakefield were inspired when their sixth-grade class read "A Long Way to Water," by Linda Sue Park, at the end of the 2017-2018 school year.

The book recounts the true story of Salva Dut, one of thousands of "Lost Boys of Sudan" who were displaced during the second Sudanese civil war. With help from the American Red Cross, Dut was able to move to the United States. He later founded Water for Sudan, renamed Water for South Sudan after South Sudan gained its independence. The organization builds wells to provide communities in South Sudan with clean drinking water, preventing the spread of waterborne illnesses.

"We have so much, and the people of South Sudan didn't even have clean water to drink! Salva went through so many difficulties in his life but he never gave up," Peter said in a statement shared with the Pilot.

After reading "A Long Way to Water," Peter, Michael, and Courtney wanted to do something to help Water for South Sudan.

"St. Joe's always teaches us to live by the Golden Rule and treat others the way that we want to be treated so when we read and researched about the people of South Sudan we couldn't imagine living their lives and knew that we had to do something," Michael said.

In June 2018, they approached the middle school literature teacher Beth Coppinger to talk about how they could raise funds for Water for South Sudan.

"I've taught the book a number of years, and I've never had students come to me and say they wanted to push forward on this," Coppinger said Sept. 23.

Because the school year was about to end, Coppinger told the students to ask her again at the start of the next academic year. She said they were outside her door as soon as the first day of school ended.

Coppinger said that all she did was supervise the students, who spent many afternoons and weekends working on their project.

"It was amazing," Coppinger said.

During Catholic Schools Week, the students gave a presentation to the entire school to educate their peers and teachers about South Sudan's water situation. They showed videos from the Water for South Sudan website and passed around a bottle of dirty water from a brook to show the kind of water people in Sudan might have to drink. Then, they delivered a bottle of water to each classroom as a reminder of why they were fundraising.

The school held a series of fundraisers, including a 50/50 raffle, T-shirt sales, and a weeklong penny war. The students also put notices in the parish bulletin and wrote to corporations asking for support.

The school's fundraising efforts made approximately $5,000, exceeding their original goal of $3,000.

"We're just kids, but we were able to make a difference in the world and we did something that changed people's lives," Courtney said.

The story did not end with that school year. Now in eighth grade, Courtney, Michael, Peter, and school reporter Erin Smail were able to meet Salva Dut at a meet-and-greet event in Brookline on Sept. 29.

"The students were thrilled and had the opportunity to share with Salva some of the fundraising ideas that they had and ask him about the wells. They were even more thrilled when he wore the St. Joseph School hat they had given him!" Coppinger said in an email to the Pilot.

Dr. Joseph Sullivan, headmaster of St. Joseph School, told the Pilot that the school plans to continue its fundraising for Water for South Sudan, and that they encourage other schools of the archdiocese to help, too.

"The cost to drill a well is $15,000 and it would be wonderful if together we could change lives in South Sudan, one drop of water at a time!" Sullivan said.