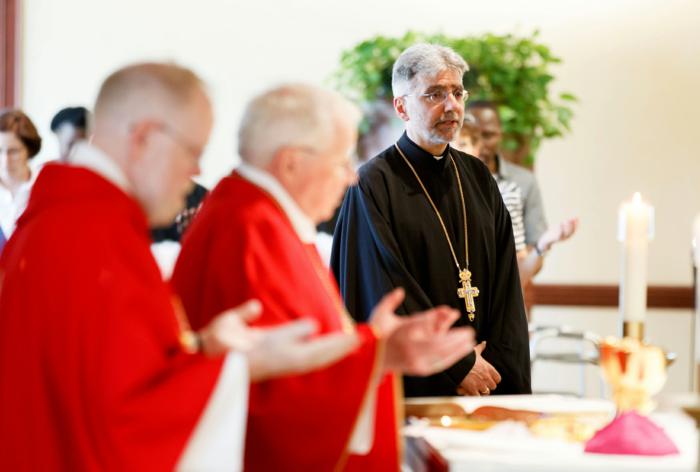 Father Demetrios Tonias, representing the Greek Orthodox Metropolis of Boston, stands during a Mass celebrated by Bishop Arthur Kennedy for the feast of Sts. Peter and Paul at the Pastoral Center June 28. Pilot photo/Gregory L. Tracy

BRAINTREE -- In keeping with an ecumenical tradition shared by Boston's Catholic and Greek Orthodox communities, Father Demetrios Tonias, dean of Annunciation Greek Orthodox Cathedral of New England, participated in and spoke at a Mass at the Pastoral Center on June 28, the eve of the feast of Sts. Peter and Paul.

Since 1996, the leaders of the Greek Orthodox Metropolis of Boston and the Roman Catholic Archdiocese of Boston have mirrored this tradition on the local level by exchanging delegates to participate in the observance of those feast days.

"It's not just a recognition, it's a participation, on the local level, in what is happening on the universal level," said Vito Nicastro, associate director of the Office for Ecumenical and Interreligious Affairs, July 8.

He said the "treasure of a relationship" between the Orthodox Church and Catholic Church in Boston "is not something that one person can take credit for. It's been built, really, over generations, but especially over the last couple of decades."

Bishop Arthur Kennedy, director of the Office for Ecumenical and Interreligious Affairs, presided over the June 28 Mass at the Pastoral Center.

Father Tonias spoke about Sts. Peter and Paul, who he said both possessed "inner strength and strong faith" and were "unperturbable in their steadfast devotion and beliefs."

"Peter and Paul stand before us today as preeminent icons of repentance and their example shines before us as an image, not only of their ability to change, but of God's infinite capacity to forgive," Father Tonias said.

He compared Peter and Paul to other biblical figures that had close interactions with Christ but chose not to seek forgiveness, such as Judas Iscariot and the Pharisees.

"Both Peter, who denied Christ, and Judas, who betrayed him, felt remorse for their actions, but only Peter truly repented," Father Tonias said, adding that if Judas had repented, cathedrals would be named after him today.

He spoke of the tendency to excuse sin and deny personal responsibility for sin. He said Peter and Paul demonstrate how to "accept our sin, so we can allow God to set us free from it."

"The 'rock' that is Peter shows us how God can transform fearful denial into courageous proclamation. The 'trumpet' that is Paul shows us how he can change fearsome invective into fearless evangelization. The rock and the trumpet show us 'the way' to forgiveness and salvation," Father Tonias said.