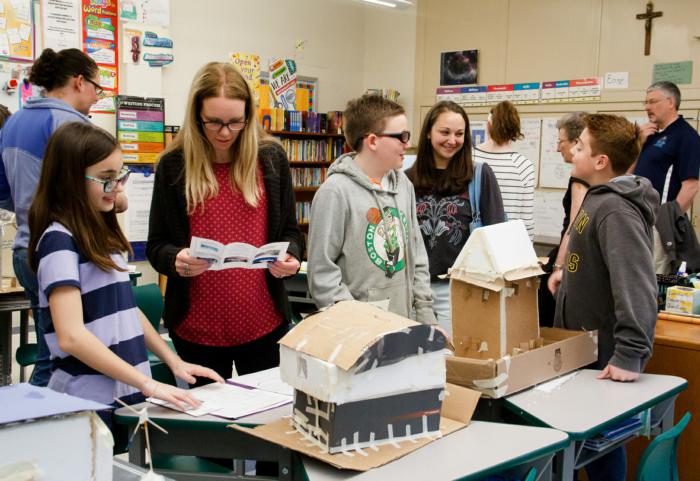 Fifth-grade students at Saints Academy in Beverly show off their model houses designed to withstand severe weather during the school's STREAM Night, May 16. Pilot photo/Jacqueline Tetrault

BEVERLY ? The Saints Academy took its third annual STREAM (Science, Technology, Religion, Engineering, Art, and Math) Night, held on May 16, in a different direction than the previous two years.

Principal Kelly Fernald said the first time the school held STREAM Night, students hardly left their own classrooms. This year, however, they were encouraged to visit students in other grades as they displayed or gave presentations about projects they had completed.

"Now they have all different things going on in classrooms, but also have presenters in the cafeteria, for them to do something interactively, too, not just share what they learned," Fernald said.

"This is an amazing event," Cenca told the Pilot.

Pre-kindergarten students learned about the United States by coloring postcards and matching them with items representing each state ? a star for Texas, an apple for New York, a lei for Hawaii. On STREAM Night they used toy trucks and a rug depicting a map of the United States to show which states must be crossed to get from one coast to the other.

Principal Fernald said the religion aspect of many STREAM projects is the concept of caring for God's creation. Kindergarten students, for instance, learned about the life cycle of plants, recording the growth of seeds in journals. First-grade students learned about meteorology. Second-grade students designed and constructed dioramas of zoo habitats (with St. Francis of Assisi cut-outs hidden inside), and wrote short fiction stories about animals.

To learn about the scientific method, grade-three students conducted experiments with magnets and toy cars and presented their results to parents at STREAM Night.

Grade-four students researched inventors and created trifold display boards that they stood behind during STREAM Night. When a button was pressed, they answered questions and shared trivia about their subject, speaking from the inventor's point of view.

"Our objective as teachers was to try to take the houses down. We couldn't take a single one down," grade-five teacher Maria Cunningham said.

Sixth-grade students designed seismographs that could show the direction and magnitude of earthquakes. Grade-seven students made paintings using egg tempera paint they had made out of egg whites and food coloring.

Grades six, seven, and eight worked in mixed groups to reduce the weight of their backpacks. A physical therapist had visited the school and talked to students about stance and posture. Working in small groups, they developed plans to make each student's backpack only 10 percent of his or her weight over the course of a week. During STREAM Night, the students' slideshow presentations about their projects were viewable on computers.

Grade-eight students completed culturama projects, which involved researching a topic, writing a paper, making a trifold display, and giving a presentation to a panel of judges from the local community. The topics ranged from Irish step-dancing to the Holocaust.

"Rube Goldberg is a perfect blend of all of them. They have to create a very complicated way to do something very easy," science coordinator Marilu Pomeroy told the Pilot.

One visitor at STREAM Night was Father Timothy Kearney, parochial vicar of the Beverly Catholic Collaborative, consisting of St. Mary Star of the Sea, St. John the Evangelist, and St. Margaret of Scotland parishes.

"It's impressive to see all the exhibits that allow the children to use their God-given gifts," Father Kearney said.