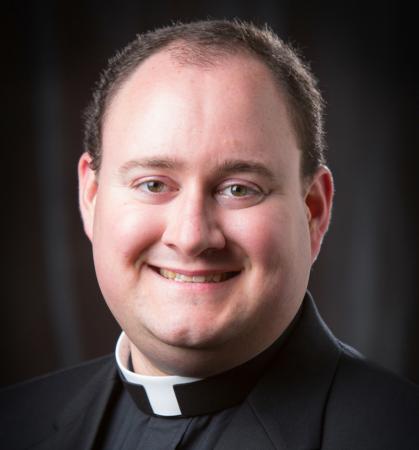 BRIGHTON -- Deacon Brian O'Hanlon remembers faith being "a central thing" when he was growing up. His parents were active in his parish in northern Virginia. His mother took him and his younger siblings to daily Mass, and their family prayed the rosary together. His uncle was a priest for the American Foreign Mission Society and visited from Korea every few years.

Deacon O'Hanlon said he first thought about being a priest when he made his first Communion.

"It was something that was in the back of my mind for a while, but as I went to high school I became interested in mathematics and computers and was thinking that's more what I wanted to do," he told the Pilot.

After high school he studied mathematics and computer science at Carnegie Mellon University in Pittsburgh. He said that although he never stopped practicing the faith, "it was just part of my life. I knew it was important, but it wasn't anything particularly special."

The school's campus ministry was run by Oratorian Fathers. Deacon O'Hanlon sometimes went to their Sunday Mass, which was held in a lecture hall. One day, the priest reminded everyone at the Mass that even though they were not in a church they had to act with respect for what was happening. That struck Deacon O'Hanlon and made him realize he had to take it seriously.

"I became more interested in learning more about exactly what the Church taught and why it taught it," he said.

He became more involved with programs offered by the Oratorians and the school's Newman Center. He began reading about the spiritual life, learning about what it meant to be Catholic, and thinking once again about becoming a priest. He also read the works of Jesuit missionary Father Walter Ciszek, author of "He Leadeth Me" and "With God in Russia."

After college, Deacon O'Hanlon took a job in Medford, doing computer security research, but he continued to nurture the idea of priesthood. Learning about prayer and the spiritual life made him interested in the charisms of different religious orders. But speaking with spiritual directors made him realize he was truly interested in being a parish priest.

Once that became clear, Deacon O'Hanlon had to decide whether to become a priest in Virginia, where he had grown up, or Boston, where he had been living for about five years. Since he had not lived in Virginia for nine years, he decided to apply in Boston.

Two events happened during his application process that seemed to confirm his decision to discern the priesthood -- and to do so in Boston.

First, Deacon O'Hanlon attended his sister's confirmation in Virginia, where a conversation with a bishop made him realize Massachusetts had a greater need for priests. This, he said, seemed like confirmation that he should stay in Boston.

Then, a week before his interview at St. John's Seminary, Deacon O'Hanlon was present at the Boston Marathon bombing in April 2013. He used to volunteer for communications for public events, and on that day he was responsible for calling anyone needed to help the marathon participants with medical needs after they reached the finish line. He was a few hundred feet away when the first bomb went off.

"I remember reaching into my pocket and grabbing the crucifix on my rosary and I started praying, and I remember thinking how much more good I could do if I were a priest," since, he said, people might need the sacraments during a crisis.

A week after the marathon, Deacon O'Hanlon learned he had been accepted to St. John's Seminary. He entered the seminary in August 2013.

As he prepares for ordination, Deacon O'Hanlon said he is looking forward to "one-on-one interaction with people, being able to encourage them and talk about the life of prayer and about Scripture, about the teachings of Church, that sort of real one-on-one accompaniment that Pope Francis likes to talk about."