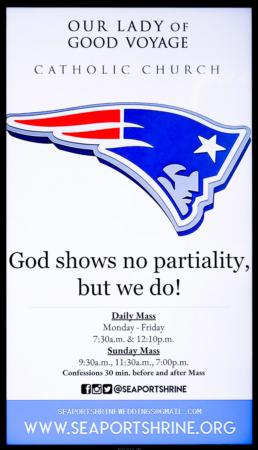 A digital sign outside the main doors of Our Lady of Good Voyage Shrine in the South Boston Seaport District reads, "God show's no partiality -- but we do!" Pilot photo/Gregory L. Tracy

BOSTON -- Few things these days have catch the attention of New Englanders more than the upcoming matchup between the Patriots and the Los Angeles Rams in Super Bowl LIII, and Our Lady of Good Voyage Shine is looking to tap into that fan fervor to bring some attention to its mission to the South Boston Seaport District.

In the week before the Super Bowl, two digital signs outside the shrine have been displaying whimsical, pro-Patriots messages.

The message on the sign beside the shrine's main door displays a Patriot's logo along with the message, "God show's no partiality -- but we do!"

Another sign, which faces Seaport Boulevard, quotes a verse from Jeremiah 51, "Rams are to be slaughtered."

Father James Flavin, episcopal vicar for the archdiocese's Central Region and rector of the shrine, said he had the initial idea for the signs. When he talked to others who work at the shrine, someone suggested the verse referring to rams.

"Evangelization is reaching people where they're at, making people laugh a little bit in life. We can tend to be so serious, and faith is serious, but we have to also have fun with this," Father Flavin told The Pilot Jan. 30.

He said it is estimated that 100,000 people pass through the seaport each day.

"A lot of people walk by and it's good to have people stop and laugh," Father Flavin said.He said the signs will continue to be shown until Feb. 3, when the Super Bowl takes place -- and the shrine already has plans for new signs celebrating a Patriots' win.