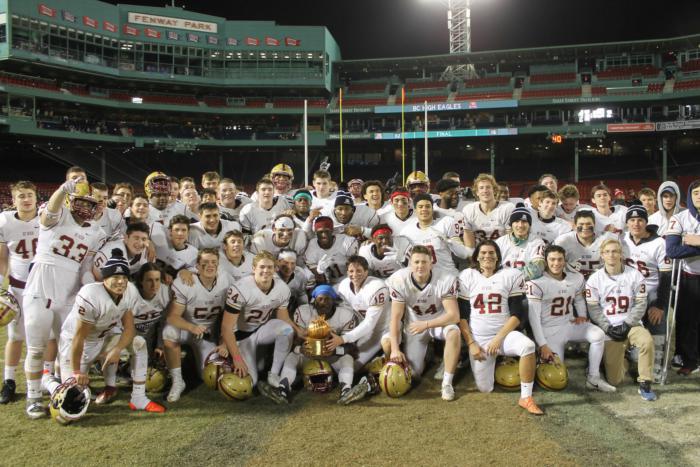 The Boston College High football team celebrates their win over Catholic Memorial and Catholic Conference title at Fenway Park on Nov. 21. The Eagles had a great season ending at 10-1. Courtesy photo

The 56th clash took place at Fenway Park on Nov. 21 at 7:00 p.m. Both teams came fired up to play in the revered setting of the Green Monster facing a baseball field transformed into a gridiron. The BC High Eagles prevailed with at 32-16 win and Catholic Conference Title for the first time since 2011. The two schools both had hopes of making it to the Division 1 super bowl and clashed in a Div. 1/South semi-final round on Nov. 3. CM won with seconds remaining in the fourth, 21-20. The Eagles, led by Ron Bartlett (8th season) end at 10-1. The Knights, led by first year coach Brett Williams end at 6-5.

Playing at home in Lynn on Thanksgiving eve, the St. Mary Spartans capped a great season with a 28-21 win over the visiting Bishop Fenwick football team in Peabody. St. Mary's had hopes of advancing to the Division 7 super bowl but lost to Mashpee in the play-off round on Nov. 18. Led by Matt Durgin (10th season), St. Mary's ends at 11-1. Bishop Fenwick, led by Dave Woods (20th season) ends at 4-7.

Malden Catholic lost a lot of games this fall but ended the season with a Thanksgiving eve win over Waltham at their home field by a score of 16-10. Down by 10 at the start of the fourth and 4:30 left in the quarter, the Lancers took care of business with two touchdowns from senior running back Howie Burns, including the game winner with 1:02 to play. Led by Jeff Smith (7th season) the Lancers end at 4-7. Waltham ends at 4-7, too.

Playing in Chelmsford on Thanksgiving eve, Lowell Catholic ended the season with a 48-12 win over Pope John XXIII in year one of this new rivalry. Led by Jason Houston (3rd season), the Crusaders end at 5-6. Rebuilding and back on the high school football scene, the Pope John Tigers, led by first year coach Craig Connors end at 2-6.

In year two of this new rivalry, Central Catholic capped a great season with a 44-20 win over Lawrence at their home field. Undefeated until Nov. 11, Central lost the Division 1/North title game to Everett by a score of 37-29 and a chance to advance for the Division 1 super bowl. Central Catholic, led by Chuck Adamopoulos (21st season), ends at 10-1. Lawrence ends at 2-9.

Playing at Roberts Field facing the former Dorchester High School building in year two of this new rivalry, Cathedral ended a great season with a convincing 28-8 win over Tech Boston Academy on Thanksgiving morning. Senior running back Khalil Blair ended his stellar career rushing for 151 yards and scoring four touchdowns. Overall in the season, he scored 34 and set a school record of 70 over his four years. Cathedral won the Division 8/North title on Nov. 11, beating Lynn Tech. A tough loss to Millis in the play-off round followed on Nov. 17 and ended their hopes of advancing to the super bowl. Cathedral, led by Paul Sobolewski (2nd season) ends at 10-2. Tech Boston Academy ends at 4-7.

Playing at Russell Field in Cambridge on Thanksgiving morning, the combined and improved teams from Matignon and St. Joseph Prep in Brighton defeated Chelsea 20-16. Led by first-year coach Michael Hill, Matignon ends the season at 4-7. Chelsea ends at 2-9.

In year one of this new rivalry, Maynard, playing at home at Alumni Stadium on Thanksgiving morning celebrated a 53-8 win over the combined teams of Marian High School and Keefe Regional Tech in Framingham. Marian, led by Harry LeSage (2nd season) ends at 3-8. Maynard ends at 8-4.

Traveling over to Glatz Field in Danvers on Thanksgiving morning, Xaverian had a great game beating St. John Prep 30-0. The win was the fifth in a row for the Hawks in the rivalry. Prep, led by Brian St. Pierre (4th season) ends at 5-6. Previously, Xaverian won the Division 1/South title on Nov. 10 for the fifth season in a row and ended the season with an appearance for the Division 1 super bowl in a rematch with Everett and lost 35-10. Led by first year coach Al Fornaro, Xaverian ends at 7-5.