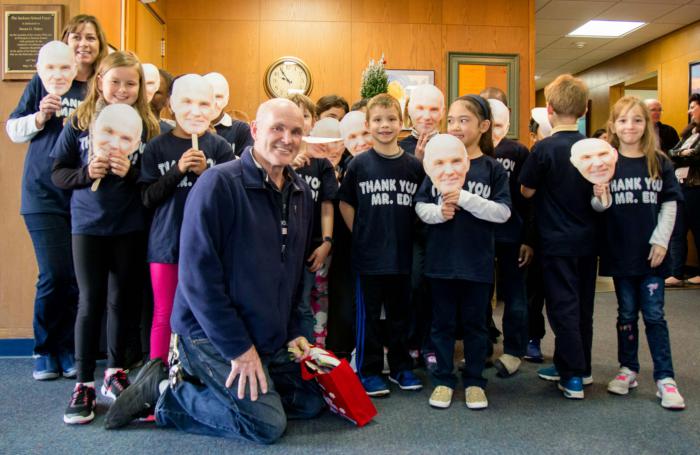 Custodian Ed Gillen, who retired this month after 23 years of service in the Jackson Walnut Park school system, poses with students at his retirement party, Dec. 1. Pilot photo/Mark Labbe

NEWTON -- Every day, when the cars rolled up to Jackson Elementary School in Newton, custodian Ed Gillen opened the doors for the students and greeted the parents with a smile. He turned the lights on in the school, opened the doors, and made coffee for the teachers, and on Dec. 1, he was honored for his over 20 years of employment during a retirement party at the school.

The lobby of Jackson Elementary School was filled with banners, desserts, and smiling past and present teachers and staff. Taped to the walls were cardboard cutouts of Gillen's face, and a large, full-sized cutout of him stood next to the door. Gillen himself stood in the middle of the room, a large smile on his face.

"This is amazing," said Gillen, surveying the room.

Gillen worked as a custodian for the Jackson Walnut Park school system for 23 years, following a 26 years of service with Mass. Turnpike Authority.

When he first began at the school system, he worked in the neighboring Sisters of St. Joseph house, helping them with cooking and cleaning, said Jackson Elementary principal Susan Niden.

He became "steeped in the mission of St. Joseph," she said, adding that Gillen is a "man of faith" and a "very faithful Catholic."

"He's such a good person, and he's wonderful with the teachers and the children," she said, adding that students have told her that "he starts their day with a smile."

During the retirement party, held on Gillen's last day of work, faculty and staff gave him presents and students read him poems, sang him songs, and presented him with handmade gifts.

While Gillen had been planning his retirement for some time, the party was a surprise.

"I came in this morning at 6:30. I didn't know anything about it," he said, but added that the party was "just wonderful."

His wife, Sally Gillen, stood near him at the party. She commented on her husband's delight at the party, but said she expected him to be quiet and thoughtful later that night, thinking about the how he will be leaving the school behind.

"I know that this is tough for him," she said. "He just loves the Jackson school and all the teachers and everybody affiliated with the school."

But, while Ed Gillen said he will still be returning to the school to visit, he knew it was time for him to retire.

He is planning a vacation to Italy with his wife and friends from their parish, St. Ignatius of Loyola in Chestnut Hill.

He said he hopes to go to the Vatican during the trip, and plans on renting a villa and visiting Rome.

When asked what he will miss most about working at Jackson Elementary, Gillen replied without hesitation "the kids, the teachers."

"It's just a great place to work, and I've enjoyed every minute of it."