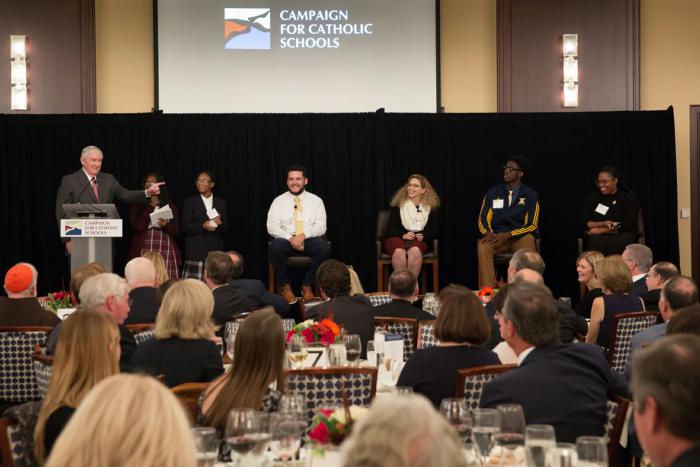 BOSTON -- When the Campaign for Catholic Schools (CCS) was established in 2007, its goal of Catholic school transformation seemed like a dream. Today it is a reality.

"We owe many a debt of gratitude," Connors said of CCS' journey to success. "Tonight is a thanksgiving for the 1,600 boys and girls who will have the opportunity to have a great Catholic education because of over 1,700 people, corporations and foundations who became first time givers to Catholic schools."

Attendees were impressed by panel's academic success and moved by their motivation to give back to others.

"I wouldn't be where I am today without your support and the support of SJPIICA" said Demezieux. "I feel it's important to help others and help provide the opportunities I was given throughout my academic career."

Kathi Aldridge, principal at SJPIICA/Mattapan, added, "As I gazed upon the alums and listened to their words, what struck me most were not their words about bricks and mortar but about relationships -- relationships with God, family, teachers, mentors, the school community and donors that valued them, believed in their abilities, gave them hope and supported them spiritually, emotionally and fiscally."

Cardinal Seán P. O'Malley recognized CCS's core supporters, including the Yawkey Foundation, which helped launch the Campaign for Catholic Schools with a gift of $15 million in 2008. That gift was believed to be the largest gift ever made for Catholic elementary education reform.

The cardinal also thanked Jack and Eileen Connors and CCS vice chair Bob and Mickey Atchinson for their leadership of the Campaign and their commitment to the families and students it serves. He also acknowledged the support of all the priests, Catholic school board members, parents, teachers, principals and students who round out our vibrant Catholic school communities.

CCS' anniversary wasn't the only reason to celebrate Wednesday night. In a surprise announcement, Bob Atchinson shared the news of a new Jack Connors Scholarship Fund created by CCS trustees, in honor of Connors' longtime leadership of the campaign. The scholarship will be awarded annually to students at SJPIICA and TCA.

Atchinson followed the announcement with a video showing the impact of the last 10 years of building Catholic schools, and highlighting new CCS programs to attract, retain, reward and develop the best teachers and principals, as well as programs to help with school sustainability.