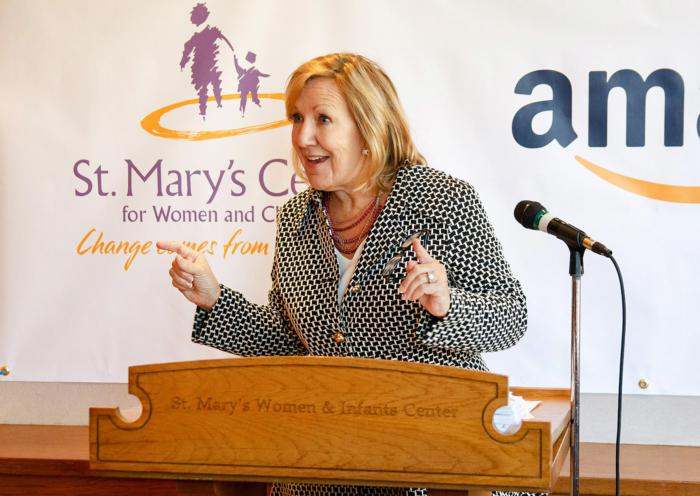 DORCHESTER -- During an Oct. 12 press conference, St. Mary's Center for Women and Children in Dorchester announced the largest single corporate gift the center has ever received -- a $1 million donation match offer from Amazon.

"We are lucky, we are blessed, we are privileged to have (Amazon) join in our mission," said St. Mary's Center President and CEO Deirdre Houtmeyers.

Originally part of the now-closed St. Margaret's Hospital, St. Mary's Center was founded in 1993. The center provides programs and services for over 600 homeless women and their families each year, offering them a range of support, including employment training, emergency shelter, and educational, clinical, and preventive services.

For every donation the center receives, Amazon will match it, up to $1 million. The funds will help allow the center to create a new community resource center, said Houtmeyers.

"This new center will provide essential services for families living in our community on the brink of homelessness to help prevent that catastrophe," she said.

The center will provide resources and support for victims of domestic or community violence, people suffering from substance use disorders, and people who need housing help or job training.

"It will be a place in the community where people can gather, meet, understand there are resources available and training before they end up falling off that proverbial cliff into homelessness," Houtmeyers continued.

Amazon's support of St. Mary's Center is part of the company's larger effort to support nonprofits that help women, children, and families in need. This is the third $1 million match campaign Amazon has announced this year.

"This place does unbelievable work, and they make the city the great place it is," said Evans, praising the center.

"On behalf of Mayor Walsh and the city, I want to thank Amazon for making St. Mary a partner and making a change in lifestyle which means everything to these young women," he said.

St. Mary's Center and Amazon hosted a "Fall Fun Festival" later that day for families at the center and Boston staff.