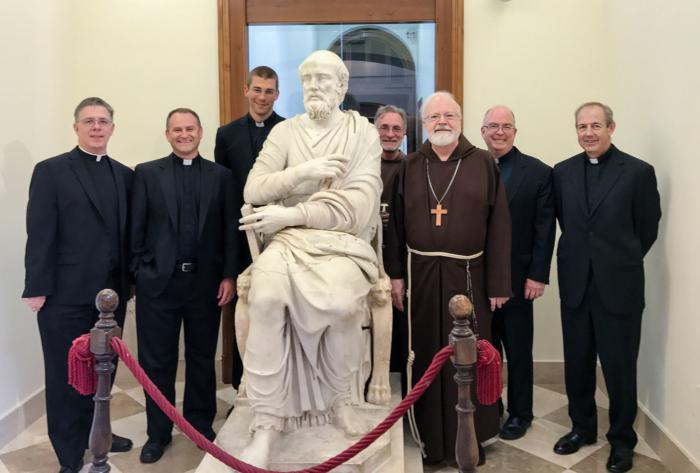 'With the Boston group in front of the statue of St. Hippolytus.' Pilot photo/CardinalSeansBlog.org

Certainly, this past week has been a very difficult time, with so many catastrophic events afflicting our planet -- the very powerful hurricanes in the Caribbean and the terrible earthquake in Mexico. These have been great human tragedies, and we pray for all those who are suffering in their aftermath.

As I mentioned last week, I am currently in Rome and I was recently speaking to a Mexican bishop here who related to me that those in the area of the earthquake are certainly undergoing great hardship, but that he has been very encouraged by the reports of how generously people are helping each other and how the community has come together to respond to those in need. As so often happens in these tragic moments, we see the best and the worst of people. While there may be some who are looting or stealing, there will be others who are sharing their last piece of bread with their neighbor and have great courage and generosity.

Also, throughout the week, I have been trying to communicate with those I know in the Virgin Islands. It has been impossible to reach people in St. Croix, but I have been able to speak to one of the priests in St. Thomas. Hurricane Maria has been a very devastating for them and, of course, Puerto Rico and other islands have also suffered greatly.

As I have mentioned, after last week's meetings of the Council of Cardinals, I remained in Rome for meetings of the Pontifical Commission for the Protection of Minors. This is the third year of the commission and we are holding our last plenary session, which included a meeting yesterday (9/21) with the Holy Father at which two of the members presented the work of the commission over the last three years.

When he said he would arrange a tour, I invited my friend Bishop Donald Lippert who is here from Papua New Guinea, as well as several Boston priests who are currently in Rome -- Father Dan Hennessey, Father Bob Blaney, Father Bob Kickham and Father Michael Zimmerman -- to join me.

...The Vatican Library is just one indication of the way the Church has protected and safeguarded the patrimony of humanity. There are over 1 million books, but more significantly, over 80,000 ancient manuscripts, including the oldest copies of the Bible and correspondence from great figures in history. Not only is the collection is open to scholars, but the Vatican has committed to putting all the documents online so that anyone around the world can access them for research. It's a great service that the Vatican provides to our world. ...They also have a copy of the Codex Vaticanus, one of the oldest extant Bibles, which was commissioned by Emperor Constantine.

In one of the rooms of the library, on one side there are documents of the ecumenical councils beginning with Nicaea. Then, in the center, they have important figures from different cultures -- Hebrew, Egyptian, Greek, Latin -- who were involved in passing on the intellectual traditions, particularly the use of the alphabet. For example, they have a picture of Pythagoras with the large letter Y hanging over him, representing the "Pythagorean Y."

I thought it was very interesting that, after going through all these figures related to the alphabet, at the very end they have Christ who said: "I am the Alpha and the Omega."