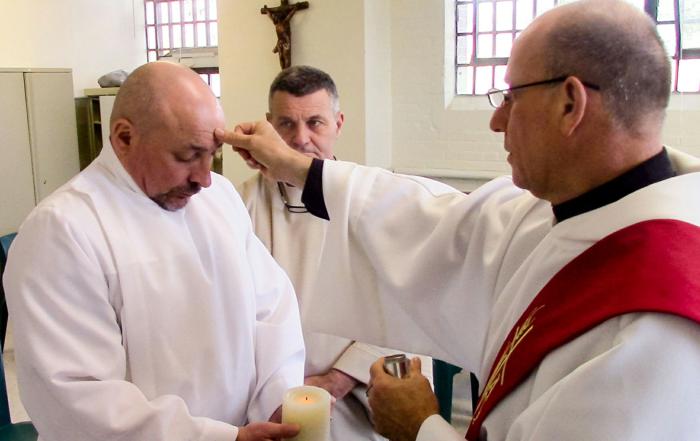 Derek Elledge is anointed with the Oil of Catechumens by Deacon Michael Charchaflian during his baptism at Middlesex House of Correction, Sept. 1. Courtesy photo

BILLERICA -- Derek Elledge didn't know if he had been baptized as a child, but to him, that didn't really matter. What he did know was that now, as a middle-aged adult, he heard the Holy Spirit calling him, and it was calling him to enter the Catholic faith.

While Elledge's story may seem a familiar one, what sets his apart is where his faith journey took place -- not in a local parish, but in the Middlesex House of Correction.

For the past 13 months, Derek Elledge had been in custody. About two months of that time was spent in Worcester County Jail, and the rest was spent in the Middlesex House of Correction in Billerica, in the jail's housing unit for military veterans.

He received the Sacrament of Baptism Sept. 1, ten days before his release, from chaplain Deacon Michael Charchaflian, in the presence of a number of his fellow inmates.

For Elledge, the decision to enter the faith came suddenly. Speaking to The Pilot by telephone Sept. 7, Elledge said that when he first heard church services were being offered, "The spirit just moved me" to attend them.

"I hadn't given it any forethought or anything; I just decided I was going to go to church," he said during the phone call that also included Deacon Charchaflian and Middlesex Sheriff's Office public information officer Kevin Maccioli.

Elledge said he left that first service feeling "good," and so decided to attend the next service, and then the next one. Soon, he approached Deacon Charchaflian with a request to be baptized. The deacon was surprised.

Deacon Charchaflian told him it would take a few months of preparation before Elledge would be ready, and Elledge agreed.

His demeanor was "conducive to this process," said the deacon.

Elledge had to pick a godparent, or sponsor, for the ceremony, someone who is Catholic and in good standing with the Church, the deacon noted. He settled on fellow inmate Brendan Trainor, who, like Elledge, was also in the veteran's housing unit.

"He couldn't have picked a better sponsor," Deacon Charchaflian said, noting that he contacted St. Theresa Parish in Billerica before the baptism to make sure "everything was in accordance with the procedures of the Church."

The ceremony itself was "beautiful," Elledge said.

"It was a very joyful process for all of us," Deacon Charchaflian added.

"I was in tears during this ceremony, because obviously I'm used to being in ceremonies where a child is being baptized... but someone who is over 50 asking me to baptize him is very humbling," he continued.

When it was over, Elledge said, it "felt almost like a load had been lifted off of me."

"I felt refreshed. I felt a lot of guilt I've had over things, the way I lived my life -- a lot of it had been lifted," he said.

It was the first baptism in "recent memory" to occur in the jail, said Maccioli, but Deacon Charchaflian hopes to see more.

"This baptism was kind of like a breakthrough to many other spiritual activities that we can embark on," he said, adding that he plans to speak with the facility's religious service coordinator and make it known to inmates that they can pursue these types of sacraments.

"We understand that people that become criminally justice involved need help on different levels," including in the departments of education, vocation, and mental health, he said.

"But, one that we are acutely aware of ... is that need for spiritual foundation, and that's something that's not lost on us here," said the sheriff.

"In the long-term, it's important to them as individuals, their families, and our communities as well."