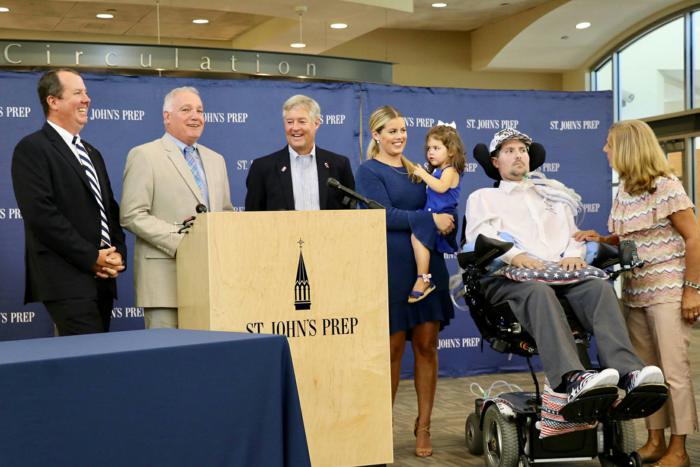 Pete Frates is joined by his family and officials of St. John's Prep in Danvers at an Aug. 30 press conference announcing that Frates has been named the school's distinguished alumnus for 2018. Photo courtesy St. John's Prep

DANVERS -- Pete Frates was honored at St. John's Prep in Danvers, his alma mater, during a ceremony that celebrated him with two accompanying first-ever school accolades and saw him named the school's 2018 Distinguished Alumnus.

Headmaster Edward P. Hardiman revealed the trio of honors at a morning news conference held on campus on Aug. 30. The full celebration of Frates' scope of achievement will include the dedication of the Prep baseball diamond in his name and the retirement of his No. 3 jersey, the first retired number in the history of Eagles athletics.

"There are so many layers of heroism within Pete's story," said Hardiman. "He is an amazing role model of resilience, perseverance, inspiration and servant leadership. His family is a model of how people come together to support one another. Today is a testament to how much we believe that Pete exemplifies what we want our students to emulate in their own journey."

A three-sport standout in football, baseball, and hockey at St. John's Prep, Frates played four years in center field at Boston College and captained the BC Eagles as a college senior in 2007, graduating with a bachelor's degree in communications. In March 2012, at the age of 27, he was diagnosed with amyotrophic lateral sclerosis (ALS, also known as Lou Gehrig's disease).

Frates has battled the disease for more than five years and sparked a cultural phenomenon by popularizing the Ice Bucket Challenge, which went viral on social media during the summer of 2014. The Beverly native ultimately inspired unprecedented fundraising in the search for a cure. Multiple charitable initiatives in association with "Team Frate Train" and Pete Frates #3 have raised more than $220 million worldwide.

Earlier in August, Gov. Charlie Baker signed an act that declares the first week of every August "Ice Bucket Challenge Week" in Massachusetts.

"What a tremendous honor that I humbly accept from the school and community I love so much," said Frates, who teamed up with the ALS Association this spring to create the Peter Frates Home Health Initiative, an organization that delivers in-home caregiving assistance to individuals suffering from ALS in Massachusetts.

"As I read the headmaster's letter that delivered the good news, the tears started to flow. There is no way I could ever express how unbelievably thankful I am. I gratefully accept this honor on behalf of my entire family, especially my parents, who worked so incredibly hard to put me and my brother Andrew through the greatest prep school in the country. Go Eagles."

In recognizing an annual Distinguished Alumnus, St. John's honors a graduate whose life exemplifies the spirit and values the school seeks to instill in all of its students. Established in 1993, the award celebrates individuals who demonstrate a commitment to faith, family and service; who have achieved professional success; and who have made significant contributions to society as volunteers, mentors or benefactors.

The Frates family's connection to St. John's runs deep with a legacy that includes Pete's father, John, who is a 1976 graduate, and his brother, Andrew, a 2006 graduate.

Frates' No. 3 jersey will be officially retired by St. John's Prep in the sports of football, hockey and baseball during a home football game under the lights on Oct. 20. The ceremony will also formalize the dedication of the varsity baseball field, which will be designated the "Pete Frates '03 Diamond."

"Pete has given his time and his talent, and he and his family have been game-changers in the lives of others," said Hardiman. "That's something we want to recognize as a school. It's just part of telling his story."

"Five or 10 or 15 years from now, when No. 3 is behind the hockey bench, or at Cronin Stadium, or painted on the baseball diamond for student-athletes to know that story, I think it will give them a deeper understanding of who they are and who they want to become," he continued.