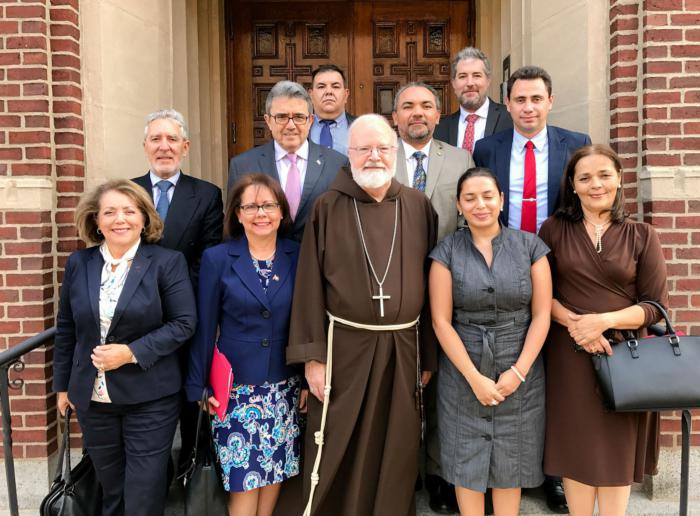 Group of consuls from Latin American countries in Boston meet with Cardinal O'Malley about needs of immigrant populations. Pilot photo/CardinalSeansBlog.org

An important visit to Pittsburgh

This past weekend (8/19-20), I went to Pittsburgh to be present as three of our Capuchin seminarians made their solemn vows of profession -- Brothers Keon Tu, Diogo Escudero and Saul Soriano. They were professed in St. Augustine Church, the very church where I made my profession so many years ago. It was also the church where I was ordained a priest.

At the time it was a fully German parish, and even the church building itself is a replica of the Church of St. Beno in Bavaria. The high altar in St. Augustine's was made by the Capuchin brothers from Germany. Our German-American province is now very much engaged with the new immigrants, and vocations are beginning to emerge from those communities, and we're very grateful for that. This year, the three men making solemn professions each come from a different immigrant community -- Brother Keon is Chinese, Brother Diogo is Brazilian and Brother Saul is from El Salvador. At the end of Mass, Father Provincial Tom Betz asked me to address the Portuguese and Spanish-speaking communities, which I was happy to do; and Father Tom, who speaks Chinese, offered some words of greeting to the members of the Chinese community who were present.

Meeting with the Consul General of Germany

On Tuesday (8/22), I met at the Cathedral with the Consul General of Germany in Boston, Ralf Horlemann. He came to see me at the Cathedral to update me on activities at the German International School in Boston, which is housed at one of our parishes, St. Anthony's in Allston. He was very pleased to report that the school is thriving and that they have a waiting list for admission.

Wednesday (8/23), I had another diplomatic visit, so to speak. This time, I met with a group of consuls from nine different Latin American countries at the Cathedral. The gathering is organized by the Consul General of Mexico, Emilio Rabasa Gamboa. This group of consuls from Latin American countries in Boston meet once a month, and they wanted to meet with me to talk about some of the needs of the Latin American communities in Boston. They also shared with me some of their thoughts on immigration and the kinds of services that their immigrant populations required, many of which are being met by the consulates themselves. They also asked if we could arrange to have an annual Mass inviting the different consulates together and I was very pleased to entertain that request.

Yesterday (8/24), we celebrated a special Mass in the Pastoral Center's Bethany Chapel for the special intentions of our Catholic Appeal donors. It was the feast of St. Bartholomew and also happened to be the first anniversary of the episcopal ordination of Bishops Reed and O'Connell, who were ordained on that date last year.

Finally this week, I want to add my voice to those welcoming the establishment of the U.S. Conference of Catholic Bishops' new Ad Hoc Committee Against Racism that will be chaired by Bishop George Murry of Youngstown, Ohio. Bishop Murry was formerly the Bishop of St. Thomas in the Virgin Islands, and he is a Jesuit Father. He is a very capable individual, and I was delighted that he has been given this responsibility by the bishops' conference.