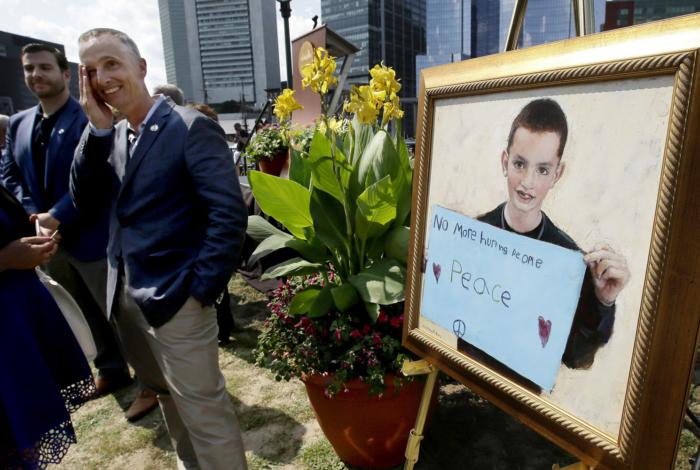 Bill Richard, second from left, father of fatal Boston Marathon bombing victim Martin Richard, brings his hand to his face while standing next to a painting of Martin, right, at the conclusion of groundbreaking ceremonies for a park named after his late son, Aug. 16 in Boston. AP Photo/Steven Senne

SOUTH END -- The youngest victim of the Boston Marathon bombing was honored during an Aug. 16 ground breaking ceremony for a park that will be built in his memory.

The family of 8-year-old Martin Richard joined Mayor Martin Walsh, Gov. Charlie Baker and a crowd of supporters at a touching ceremony at the park site on the South Boston waterfront.

Richard was among three people killed when two bombs exploded near the marathon finish line on April 15, 2013.

Among those present at the ceremony were Msgr. William Fay and Bishop Arthur Kennedy.

Msgr. Fay knows Martin Richard's father, Bill Richard, personally, and said he was "very taken by the warmth of the folks who were there."

"There was a genuine sense of fraternity with the Richard family and a willingness to be with them as they really were celebrating the life of their son," he said to The Pilot, Aug. 23.

The ceremony was "a very lovely experience, very positive, and I think it spoke to the best of what the city of Boston is. I was really proud to be there as a priest of the diocese," he said.

During the ceremony, Bill Richard recalled his son's quick wit, charm and "insistence on fair play." After the bombing, a widely circulated photo showed Martin holding a poster he created the year before with the message "No more hurting people -- peace."

"His enduring message of peace that just continues to will people to come together for the common good -- that's why we're here," Bill Richard said.

Bill Richard said the park, which will be universally accessible and will include a playground, is to be "a place where all kids will have the opportunity to learn together and play together without prejudice."

The park will be built near the recently opened Our Lady of Good Voyage Shrine and the Boston Children's Museum, and is expected to open in the fall of 2018.