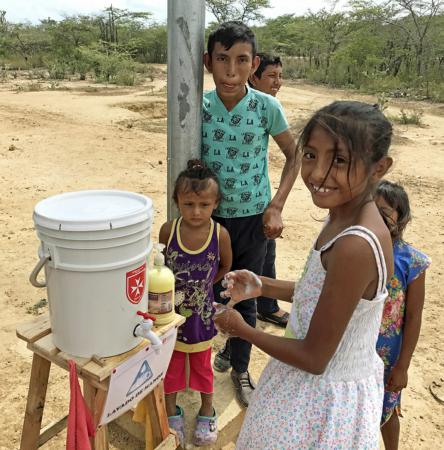 BRAINTREE -- It was seeing a young woman suffering from cerebral palsy and lying on the floor in her mother's arms that particularly stood out for Ed Delaney. The Winchester-resident had been in Northern Colombia surveying the work of Malteser International Americas, of which he is a board member and its vice president.

"Her mother was trying to hold her, controlling her involuntary movements," Delaney told The Pilot, Aug. 9, about two weeks after returning from his trip. "It was very heart-wrenching."

The family was one of many in a community he visited that had been "hit hard" by Hurricane Matthew, the category-5 storm that devastated a number of South American and Caribbean countries last October.

Malteser International Americas identified families in the community most in need of support, such as families with disabled or special needs family members, and came to their aid. It was during a visit of the homes of these families that Delaney met the mother and daughter, who had been selected to receive a "sort of an extra room" added onto their house, a bathroom, and other amenities.

For the past four years, they have maintained a presence in Northern Colombia, "trying to create better futures, healthier futures, futures with opportunity for children and families in Colombia, specifically the indigenous populations hurt the most from displacement and malnourishment," said Jill Watson, the organization's communication manager.

To do this, the organization, the humanitarian arm of the Order of Malta in North America, Latin America, and the Caribbean, partners with local organizations and governments and relies on a number of volunteers and staff.

Delaney met some of the staff, which includes a psychologist and experts in humanitarian relief, at the organization's office in the city of Santa Marta. Joined by Malteser International Americas Executive Director Ravi Tripptrap and others, he also met with local Malta leaders. Yet, for the most part the team surveyed the many projects the organization has helped put together and fund.

Very far north in Colombia, there is a small village populated by members of the indigenous Wayuu tribe. The people, displaced from their "historic land," have a "host of humanitarian issues," and that is where Delaney visited first.

The land that the tribe inhabits is arid, resembling a "semi-desert," Delaney said. Water is scarce and finding food that has real nutritional value is difficult. To combat this, the organization gives "manna packs," which Delaney said look like packages of rice but contain a host of nutrients, to several hundred children there.

The children periodically have their height and weight evaluated to see if the measurements are on par with the rest of Colombia. So far, Delaney said, "we're making great progress with that project."

The organization also has a wash program there, designed to encourage members of the community to wash their hands and maintain good hygiene. It set up a station, complete with a solar panel, water, and soap, for that purpose.

Delaney visited another group of indigenous people. This community was also displaced, and now lives in a mountainous environment prone to soil erosion and climate change issues, including strong storms and hurricanes.

Working with partners, Malteser International Americas provided the community with a range of biodiverse crops in an effort to fight soil erosion, increase biodiversity in the area, and provide farmers with a way to make a living.

Many of the farmers Delaney met with were "excited" to demonstrate the "tremendous" production of their crops. By selling them in a nearby village, the farmers were "making a real living there," Delaney said.

The organization also helped to introduce another economic model to communities in Colombia -- beekeeping.

"It's a new industry, it's sustainable for them, it's a new revenue stream for them, and I think that's one we are particularly proud of in Colombia," said Delaney.

Beekeepers can farm honey, or lend out their hives to others. And while bees across the globe have had their populations thinned by pesticides and diseases, Malteser International Americas worked with local universities to help identify bees capable of resisting such issues, and introduced those populations to communities.

For Delaney, who has only been the vice president for less than a year, the trip was informative.

"I was really impressed with the families, the people, the people were very warm and friendly, and very appreciative of the support they're receiving," he said.

"They're also very, I think, excited being able to have a new life. It's not just charity, it's really about changing lives in a sustainable way, and I think that you could really sense that," he continued.