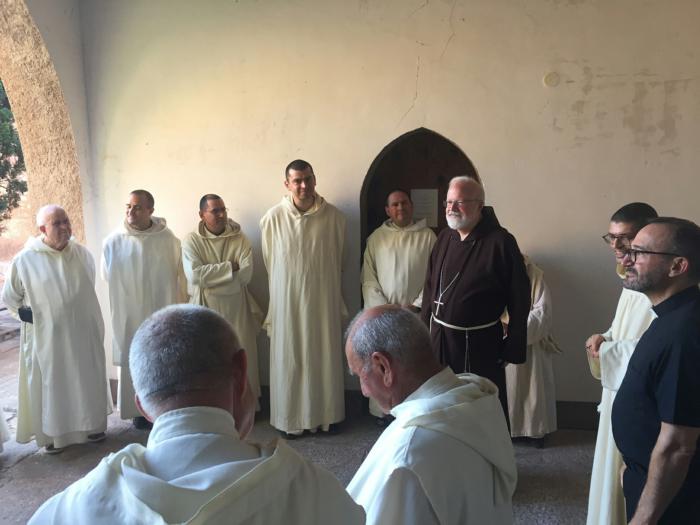 'The monks there live the eremitical life of St. Bruno. Their hidden life is just a beautiful vocation and a gift to the Church, which is one of prayer and penance, praying for the Church and the world.' Pilot photo/CardinalSeansBlog.org

Each year, around the feast of St. John Vianney, the patron saint of priests, we like to have a get-together for our priests. This year, for the first time, it was held at Pope St. John XXIII Seminary in Weston. There, we had a holy hour where I was able to share some reflections with the priests, and afterwards we had a cookout. It was an opportunity for the priests to spend some time together in a relaxed atmosphere.

It was a wonderful day, and we are very grateful to Father Brian Keily for hosting us. It's always a wonderful opportunity for us to be together during the summertime.

Then yesterday (8/10), I gathered with the consecrated virgins in the archdiocese at the Pastoral Center. We are very blessed to have this group of women in the archdiocese who have embraced this vocation. They joined us for our noon Mass and then we had a lunch together.

The vocation of the consecrated virgins, much like that of the permanent deacon, was very important in the Early Church but, over the centuries, eventually died out. The Church has re-established them as special vocations and we are pleased and blessed to have a number of women in the archdiocese who have made this consecration to devote their lives to the Lord and are involved in so many works of mercy and the works of the apostolate.

Like most of you, during the summer I try to take some time away and, this week, I'd like to share with you some of my activities.

Last month (July), I was able to spend a few days in Spain to see friends and to visit with the Cardinal Archbishop of Valencia, Cardinal Antonio Canizares. While I was there, the cardinal brought me to visit the Carthusian monastery in his diocese, which reaches back to the 11th century.

The monks there live the eremitical life of St. Bruno. Their hidden life is just a beautiful vocation and a gift to the Church, which is one of prayer and penance, praying for the Church and the world. It was a very wonderful experience to be able to visit them. As you may know, the monks usually do not receive anyone from the outside world, and when we arrived at the monastery gate, we weren't sure that they would even open it for the Cardinal Archbishop. Believe it or not, it took a little convincing for them to let two cardinals in, but eventually they did!

We felt even more privileged that the superior called all the monks together because it is a very rare thing for them to all assemble, but we were grateful that we are able to be with them and greet them.

I had never had an opportunity to visit the World Trade Center Memorial at Ground Zero. It was a very profound experience. The monuments that have been created where the Twin Towers stood are like two deep wells with water cascading over the edge.

On the walls around the memorial are written the names of the victims of 9/11. Of course among the names inscribed in the wall is that of Father Mychal Judge, the Franciscan fire chaplain who died ministering to victims of the attacks.

Of course, it is a very short walk from the World Trade Center to the river where you can look out to the Statue of Liberty. Let us hope that our nation's immigration policy will live up to the inscription on the Statue: "Give me your tired, your poor, Your huddled masses yearning to breathe free, The wretched refuse of your teeming shore."