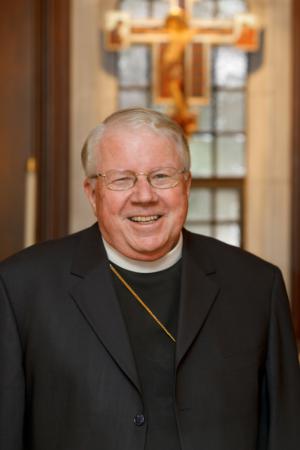 The Holy See announced today, June 30, 2017, that Pope Francis had accepted the request of Bishop Arthur L. Kennedy to resign as auxiliary bishop of the archdiocese. Bishop Kennedy had submitted the customary letter of resignation "on having reached the age limit" on his 75th birthday, Jan.9, 2017. The Boston native has been serving as an auxiliary of the archdiocese since his episcopal ordination on Sept. 14, 2010.

The bishop was born on Jan. 9, 1942, the eldest of six children of the late Arthur and Helen (O'Rourke) Kennedy. His brothers in order of birth after him are Kevin, Terrence, Christopher and Brian. Bishop Kennedy has one sister, Maurabeth, who is the youngest of that generation of the Kennedy clan. He was raised in the Roslindale section of Boston, attending Longfellow Elementary School before transferring to St. Aidan School in Brookline, where he was taught by the Sisters of St. Joseph. Bishop Kennedy then matriculated at the prestigious Boston Latin School during his high school years and was graduated in 1959.

After he completed high school, he entered St. John Seminary College, first at Cardinal O'Connell in Jamaica Plain and then at St. Clement Hall, Brighton, graduating with a Bachelor of Arts degree in philosophy in 1963. After graduation, he left for Rome for further study, residing at the Pontifical North American College while studying at the Pontifical Gregorian University. The then-rector of NAC, Bishop Francis Reh ordained him to the priesthood at St. Peter's Basilica on Dec. 17, 1966.

His first parish assignment was as an assistant at St. Monica, Methuen followed by an assignment as an associate at St. Joseph in East Boston. During these years, on his own initiative and on his days off, he took graduate courses at Boston University and received a Ph.D.

With the permission of Cardinal Humberto Medeiros, renewed by Cardinal Bernard Law, he accepted a teaching position at the University of St. Thomas in St. Paul, Minnesota. For the next three decades he taught undergraduate, graduates and priesthood candidates. During his time at St. Thomas, then-Father Arthur Kennedy wrote papers or made presentations on novelist Flannery O'Connor, German philosopher Karl Jaspers, Czech playwright, dissident and politician Vaclav Havel and English cultural history scholar Christopher Dawson. He also wrote on ecumenical dialogues with the Protestant, Jewish, and Islamic faith traditions.

His time in Minnesota was interrupted twice -- once from 2000 to 2001 when he returned to Boston to teach at St. John Seminary and a year later from 2002 to 2004 to serve at the U.S. Conference of Catholic Bishops (USCCB) in Washington, D.C. where he was the executive director of the ecumenical and interreligious affairs secretariat. During his years in Minnesota he not only taught at the university but assisted regularly in archdiocesan parishes.

In 2007, Bishop Kennedy was named rector of St. John Seminary. During his term as rector, the seminary saw a steady increase in enrollment.

Pope Benedict XVI named Father Kennedy as titular bishop of Timidana and auxiliary of the archdiocese on June 30, 2010; together with Bishop Peter Uglietto, he was ordained bishop on Sept. 14, 2010 at the Cathedral of the Holy Cross.

He continued serving as rector of St. John until being named Secretary for Evangelization, where he has been serving since. In addition to his archdiocesan responsibilities which includes membership on numerous boards, committees and commissions, he has also been a consultant of the Committee of Doctrine of the USCCB and, on the international level, he is a Holy See appointed member of Anglican-Roman Catholic International Consultation (ARCIC III).

He speaks fondly of his visits to parishes especially celebrating the Sacrament of Confirmation. Anyone how knows him will admit of his theological acumen and his keen insight into theological issues -- those on the front burner and those on the back. He is possessed of a quick and dry wit; fellow auxiliary bishop and Boston Latin alumnus, Bishop Robert Hennessey said, "I am not sure Arthur knows how funny he really is." Or maybe he does.

The bishop recently moved his residence from St. John Seminary to St. Mary Rectory in Dedham. He is delighted to be in the company of the several priests in the house and the administrator of the parish, Father Wayne Belschner who "appreciates my need for library space."

With a twinkle he tells you about his retirement, "This is good, it'll give me time to work on some projects I have been neglecting."