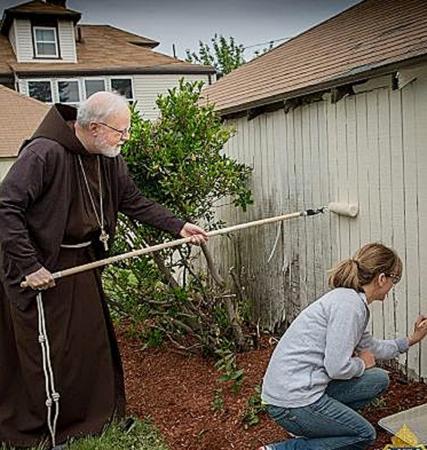 'Wednesday (5/24) I paid a visit to our volunteers from the Pastoral Center who were taking part in our annual Parish Service Week...' Pilot photo/CardinalSeansBlog.org

Sunday (5/21), I went to St. Joseph-St. Lazarus Parish in East Boston to celebrate a Mass to mark their 125th anniversary.

The parish was originally very much comprised of Italian immigrants, but today there is a very large Hispanic and Brazilian community in the parish. For a number of years, the parish has been staffed by the Don Orione Fathers, and we were pleased to be joined by the General Superior of the Don Orione Fathers, Father Oreste Ferrari; their Secretary General, Father Janus Sowizdrzal; the pastor of St. Joseph-St. Lazarus, Father Mirek Kowalczyk, as well as a number of other priests. We also were pleased to be joined by Mr. and Mrs. Joseph Ruggiero, who have given significant time and effort in support of the parish and East Boston Central Catholic School.

It was a beautiful Mass and was followed by a reception in the parish hall. Unfortunately, I was unable to stay because I was scheduled to celebrate a baptism and confirmation at the Cathedral that afternoon.

Monday morning (5/22), I went to Boston College for their annual commencement ceremony. It was a beautiful graduation despite the rain. Among the honorary degree recipients this year was actor Chris O'Donnell, who attended Boston College, as well as Amy Guen, a member of the Chinese Catholic Community at St. James Parish who graduated from B.C. more than 60 years ago.

Sen. Bob Casey also received an honorary degree and was this year's commitment speaker. He is a graduate of Boston College and had served as a Jesuit volunteer. Father Wayne Belschner also received his doctorate and represented his class in receiving his hood and diploma from Father Leahy and Tom Fish.

Following the graduation, I joined the Provincials of the Jesuit Conference of Canada and the United States who were holding their annual meeting this year at the Campion Center in Weston. I joined them for lunch and a time of dialogue on such issues as the state of the Church and Catholic education. It was a very interesting discussion.

Wednesday (5/24) I paid a visit to our volunteers from the Pastoral Center who were taking part in our annual Parish Service Week, a time when workers from our Central Ministries take time out to travel to a local parish to give it a "spring facelift," as it were, with such things as cleaning, painting and landscaping.

Every year they give me a new task to help out with, and this year, I helped paint a railing and part of a garage. It came out beautifully, if I do say so myself! (However, I have to say the champion of the effort was really Msgr. Bill Fay, who painted much more than I did!) While I was at St. Brendan's I also took the occasion to visit the Irish Pastoral Center. When I dropped in, they were enjoying their tea and soda bread!

Lunch with the newly ordained

Also that day, we held our annual luncheon for the newly ordained priests and their families at the Pastoral Center.

This is a lovely custom we have here in Boston, bringing the families together during the week following the ordination and first Masses to have an opportunity to spend some time together. The time around the ordination is just so hectic that it is impossible to properly get to meet the families.

Following the luncheon, we heard remarks by Father Wellington Oliveira on behalf of his class. I also took the opportunity to present the parents of the new priests with the gifts of a rosary and a disc of photos from the ordination.