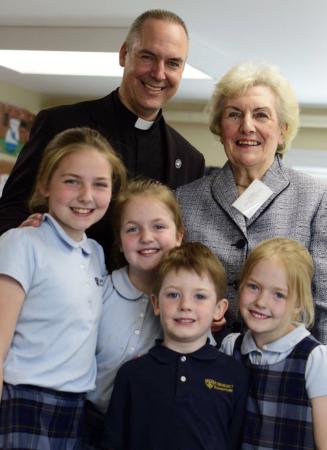 NATICK -- The past comes alive for students at St. Benedict Elementary School in Natick.

"What makes our school unique in that we are a classical school in a very rigorous Catholic environment," explains Elliott Kane, fifth and sixth grade teacher at St. Benedict's.

"We try to look back into the past and see how the great minds that framed our government and shaped our world were taught," she explained. "And this is what we use to teach our children."

According to Kane, the school was founded four years ago "by parents who wanted a rigorous educational model" for their children.

The result is an "integrated, interdisciplinary model" that empowers students and raises them in a Catholic environment, she said.

"There's a big emphasis on foundations," Kane explained. "For example, we emphasize grammar and how language works. We teach Latin beginning in the third grade. We try to give students great pieces of literature and poetry to memorize."

In addition, the school also focuses on their Catholic identity: with daily morning prayer, weekly Mass, monthly adoration and confession, in addition to their religion class.

"The students here build up their intelligence and their moral virtues in their everyday life," Kane said. She noted that religion plays a role in all parts of the school day.

"We teach the students to love and appreciate the value of silence and of prayer," she said.

Kane praised Father Peter Stamm, parochial vicar at St. Joseph parish in Needham, who comes to the school every week on his day off.

"He has been an absolute Godsend," Kane said. "By being here, he has brought an added dimension to our school."

Another unique aspect of the curriculum, according to Kane, is the way subjects are all interwoven into the curriculum. She cited the sixth grade curriculum centered on Rome, which has components of English language arts, art, government, and religion. They read Shakespeare's "Julius Caesar" and "The Aeneid," build a model coliseum, learn the basic ideas of law and governance and see how Christianity entered into the Roman Empire, all as part of the same curriculum.

"Rather than have each subject divided, each doing a separate thing, all the subjects help bring the material to life," Kane said.

The school also uses a spiraling curriculum, she said, where subjects are introduced in the younger grades and then re-introduced as the students get older.

"By the time they are in sixth grade, the students really know their history well because they have been familiarized with it over and over again," she said.

"It is a very cool thing to be a part of this school," Kane added. "What a blessing it has been to work here!"