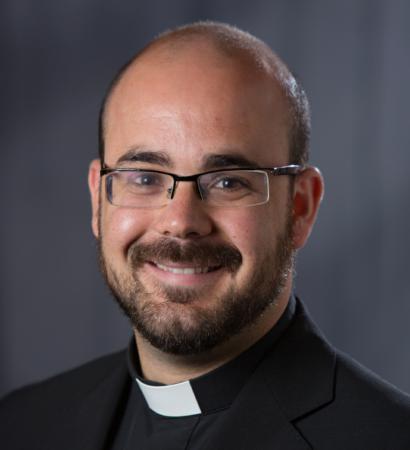 This is the sixth in a series of articles profiling each of the eight men who will be ordained to the priesthood by Cardinal Seán P. O'Malley on May 20.

Deacon Gomis has personally experienced the power of Christ's forgiveness and the possibility of having a life rebuilt by God.

A cradle Catholic, Deacon Gomis grew up in Cartagena, Spain. He recalled that God was always present in his childhood: his family all participated in the Neocatechumenal Way, they attended Mass regularly, they would all pray together every Sunday.

As a young child, he began to feel that God was calling him to the priesthood. But instead of heeding that call, Deacon Gomis did the complete opposite.

"I kept seeing God following me, but I completely rejected it," the 31-year-old admitted. "I turned my back on God and set my life on a collision course with destruction."

By the time he was 18, he said, he was "completely lost" -- in a life of drugs, alcohol, women and parties, he said. He even dropped out of high school, and began looking for work.

"I was a zombie that slept all day and partied all night," he said.

All that changed in a moment, when his girlfriend left him for another man, leaving Deacon Gomis alone.

"I felt absolutely abandoned and told myself, 'Now is the time to stop,'" he recalled. But try as he might, he was unable to turn his life around on his own.

"That was when I returned to the Church," he said. "And what I heard, perhaps for the first time in my life, is that God loved me as I was, and that the plan God had for my life was a plan that would lead me to happiness," he said.

Deacon Gomis began to "attach" himself to the Church. He was invited to take part in a vocational retreat, which he reluctantly agreed to attend, although he was still not sure God was still calling him to the priesthood.

It was during this retreat, at a penitential liturgy, that Deacon Gomis's life turned around for good.

"I confessed everything, absolutely everything that I had done, leaving nothing out," he said. "And I felt the love of God completely that day. I truly felt accepted and loved by God."

Initially, Deacon Gomis began his studies at the Redemptoris Mater Archdiocesan Missionary Seminary in Murcia, Spain, where he would have been ordained a priest for his home diocese.

"But then God changed things up," Deacon Gomis laughed.

In December 2011, Deacon Gomis was invited to complete his studies at the Redemptoris Mater Archdiocesan Missionary Seminary in Boston, and so be ordained for the Archdiocese of Boston.

"I feel privileged to be here," he said. "I feel like I am in mission here in Boston. I am not from here, but I really feel like God has called me to serve his Church as a missionary in Boston."

As part of the priestly formation at the seminary, Deacon Gomis spent several years as a lay missionary -- first in Granada, Spain, then in Mexico and lastly in Utah and Nevada.

"These years are fundamental experiences for me," he said. "Apart from physically experiencing that God provided -- when we had no money for gas, or had no place to stay, or things like that -- I have seen that these years have formed me as a man, have taught me to take my life seriously, and to be able to see, through in the lives of others, that God exists."

These experiences also made him eagerly anticipate his ordination.

"But I am also looking forward to bringing Christ to the people, not just in a sacramental way, but with my life, with my actions. I don't care where I am -- here in Boston, Spain, Sri Lanka, any place -- the important thing is to evangelize."