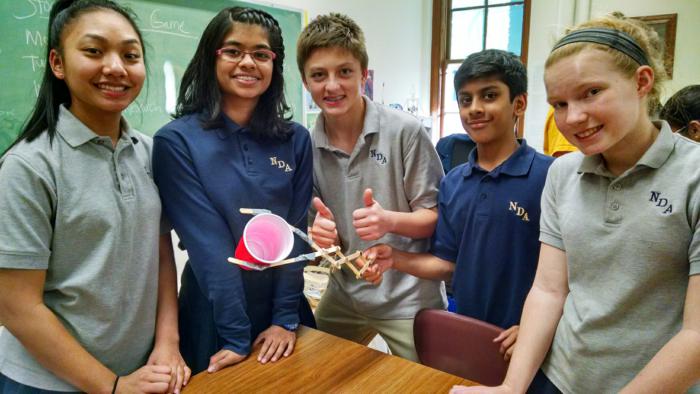 The school hired Jennifer Holder to be the STEM teacher, and the program began taking shape. For the past three years, Holder has built a STEM curriculum -- one that is filled with hands-on activities.

One such example is the seventh and eighth grade's Mechanical arm project. Using only simple materials such as tape and popsicle sticks, students working in groups must create a fully functional mechanical arm.

"The arm must pick up a cup filled with small objects and turn the cup over and dump out the contents," she explained. "The students get to do research on their iPads at school, but they often get their ideas on their own."

The success of the school's STEM curriculum prompted the school's president, Randall Adams, to expand the program to include the arts.

"We are in the process of moving our STEM curriculum into a STEAM curriculum," Adams said.

Beginning next September, the school will offer a "Makerspace" -- an open area filled with tools, 3-D printers, wood, metal, cloth and other materials so that students can freely create their projects.

"We are helping our students to innovate and design," Adams said. "As little children, everyone loves to draw, to create with clay or playdough, but over the years, we get away from designing and drawing. We are trying to get to a place where we incorporate the skills they use to design into their everyday school."

"This is a large commitment for the school, not only fiscally, but for the teaching staff as well," Adams explained. "It will take a whole lot of collaboration and planning in order to create a cross-curriculum webbing that incorporates all different subjects."

"It's a slow process, but the staff has really embraced the curriculum mapping," he added.

According to Holder, moving the curriculum from STEM to STEAM will also allow her to help the students inquire into real-world problems. She hopes, for example, to have the older students look into hunger.

"Many countries are struggling with hunger issues. Some countries have no electricity to cook the foods they grow. I am thinking to have the students research this, and build a solar cooker, one that actually can cook foods," she said. "Having the Makerspace will allow me to say to them, 'Go in and be as creative as you want to be.'"

Adding the arts into the STEM curriculum will also allow students who perhaps are not as strong in mathematics or science to find their niche, Adams added. "It will help all students to work together to create a finished project, no matter what each person's strength may be."

Adams noted that although the school is beginning the STEAM initiative, "it is just another component of the learning process."

"We are not going to be a STEM or STEAM school," he said. "Basically, we really need to prepare kids for the 21st century and for the world that's out there. STEAM is just one way we will do that."