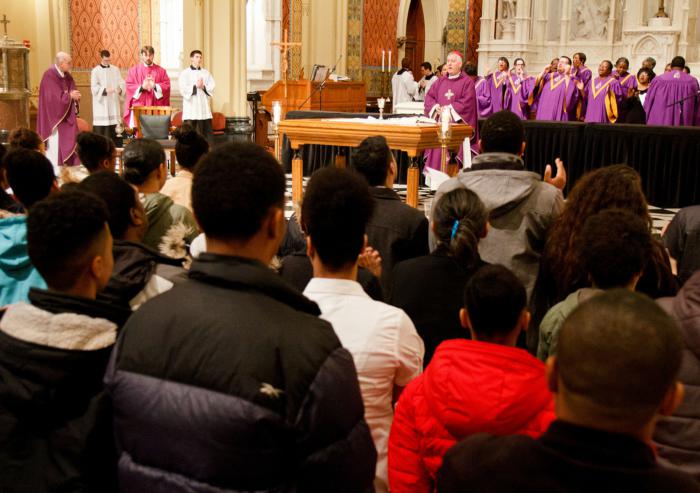 Bishop Mark O'Connell celebrates the special Mass of Thanksgiving for those serving in Child Protection Ministries at Our Lady Help of Christians Church in Newton April 1, 2017. Pilot photo/Mark Labbe

NEWTON -- Marking the start of National Child Abuse Prevention Month, the Archdiocese of Boston held a special Mass for those working in Child Protection Ministries at Our Lady Help of Christians Parish in Newton, April 1.

Celebrated by Bishop Mark O'Connell, auxiliary bishop of Boston and judicial vicar for the archdiocese, the Mass of Thanksgiving for those serving in Child Protection Ministries saw songs sung by the archdiocese's Black Catholic Choir and a youth choir from St. Edith Stein Parish in Brockton. While attendance was dampened by a weekend storm that brought snow and icy roads to much of the region, those who did attend were grateful for the Mass.

"I think it's important for some of us that are out here on the forefront or others in the background to come out and start talking about this. To come out and say 'Yes, we've made some grave mistakes in the past, but we're doing some good to make sure the past never happens again,'" said Moises Rodrigues, a child protection specialist with the archdiocese.

"I was glad some folks came from other parts of the diocese to help us usher in the child protection month," he said.

In his homily, Bishop O'Connell thanked those in attendance for their continued work in helping to keep children safe.

"This is not a Mass where we congratulate ourselves on a job completed, but rather it is good for the Church to thank you all for your good work and to encourage you all to keep that good work going," he said.

"Yes, we acknowledge out painful situation here in Boston and yet our gaze looks also upon the extraordinary efforts that have been made and are still being made to continue to ensure that our Catholic Churches and institutions are safe places. With over 190,000 people trained in abuse prevention we can be proud of your efforts," he continued.

Through the lens of the Gospel reading of Lazarus, the bishop spoke about the sexual abuse crisis that rocked the Catholic Church beginning in 2002 and the efforts the Archdiocese of Boston has made to prevent abuse from happening in the future. He highlighted several parts of the reading, including John 11:9, when Jesus says "If one walks during the day, he does not stumble, because he sees the light of this world. But if one walks at night, he stumbles, because the light is not in him."

All of our journeys with our call to serve those who have been abused by priests began in darkness and we have helped bring the sinfulness of the Church and some of its priests and bishops into the light. Few, if any, knew the extent that we lived in darkness and most of us had to gradually turn to the light," said Bishop O'Connell.

Having begun working in the chancery of the Archdiocese of Boston in the summer of 2001 as a "newly minted Canon Lawyer," he recalled how he couldn't fathom what was to come after the first Boston Globe Spotlight Team article was released on Jan. 6, 2002.

"In my ignorance, I thought things were already handled correctly," he said, and even after "the initial waves crashed our shores I was still in part in darkness."

But, he added, "we have been gradually led, especially by Cardinal Seán (P. O'Malley) out of darkness... into the light where our feet do not stumble."

"Here in the light we can together address the problem in the past and prevent it in the future, but first we must commit to always exposing the evil in God's light; the light of Jesus Christ," said the bishop.

Cardinal O'Malley, in a video message that was played before the start of the Mass, also thanked those working in the Child Protection Ministries for their continued efforts in keeping children safe.

He spoke of the Protecting God's Children training the archdiocese does to educate adult volunteers and staff on how to recognize child abuse, how to respond if abuse is suspected, and how to take steps to prevent abuse.

"Tragically, child abuse is widespread in society, but the Catholic Church is striving to be a leader in prevention and education," he said.

"The training programs, coordination of background records and related activities are not simply tasks, they are ministries in the life of the Church," said the cardinal.

"Your service is of great importance for our efforts to do all that is possible to ensure the safety of children and vulnerable adults in our parishes, schools and the wider community," he continued.

Speaking to The Pilot following the Mass, Maureen DiMilla, director of the archdiocese's Office of Child Advocacy, Implementation and Oversight, said she has been working in child protection for over 20 years, which includes her 18 years working with the Department of Children and Families.

"I love the work that I do with the archdiocese because it's preventative work," she said. "I'm getting to do work where we're preventing things from occurring, so it's wonderful."

"There's been many people who have given their time as well as their talents to making sure children are safe in their local parishes, in their schools, and in the archdiocese as a whole," she said.