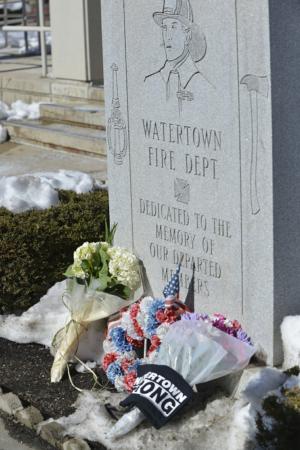 Flowers are laid at the base of the fallen firefighters memorial outside the Watertown Fire Station March 17. Kenneth Martin/ZUMA Press via Newscom

WATERTOWN -- Hundreds of firefighters, community members and other mourners gathered for a funeral Mass March 22 at St. Patrick Church in Watertown to bid farewell to Watertown firefighter Joseph Toscano.

Toscano, a 54-year-old Randolph resident and a married father of five, suffered a medical emergency while fighting a house fire on March 17. He was rushed to a nearby hospital, where he later died.

During his funeral Mass, he was remembered as a hard-working firefighter, a handyman, a talented cook, and someone who deeply loved his family.

"Joe was an all-purpose man at the firehouse -- there wasn't anything he couldn't do. Whether he was cleaning the bathrooms, driving the apparatus, taking care of the sick and injured, or fighting fires, he did every job very well," said Deputy Chief Robert Quinn.

He was always available to give a helping hand, he said, and "his house and his family were the center of his universe."

Toscano's daughter Alyssa Toscano also offered words at the Mass, standing at the ambo with her four siblings gathered behind her.

"My life-long fear as a fireman's daughter became true. I always feared this day would come as a little girl, but I never thought it would become my reality. I am now living my worst nightmare," she said.

She recalled many happy times with her father, like when he would take the family on outdoor trips, like hiking and fishing.

"Every weekend he would have something planned for us," she said.

No matter how busy Toscano was, he would always answer his children's phone calls, and "he was always the one to call when we needed something," said Alyssa Toscano.

"We are so thankful to have had a dad like him who blessed our lives. He cared for us more than we all knew, and we are so appreciative for all that he did for us. We will miss him so much everyday but we know that he will be watching over us and will be in our hearts forever."

A long-time friend, Marcus DeFlorimonte, offered a reflection as well.

Cardinal Seán P. O'Malley led a wake service for the family and other mourners, March 21, the day prior to the funeral.

In his March 24 blog post, the cardinal noted he was "able to offer my condolences to his wife and his five children, as well as to members of his extended family" at the service.

"I commented how grateful everyone in the community is for the inspiring service that firefighters give, putting their own lives at risk to protect others," the cardinal wrote. "We once again want to express our solidarity with Firefighter Toscano's family and all his fellow firefighters."

Toscano is the first Massachusetts firefighter to die in the line of duty since 2014, when two Boston firefighters were killed battling a fast-moving blaze in Back Bay, according to the state fire marshal's office.

A memorial fund has been established to help Toscano's family, and donations can be made to the Watertown Firefighters Relief Association.