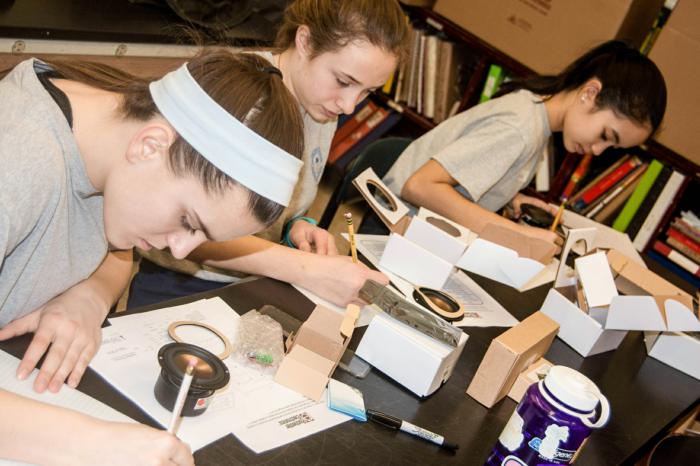 NEWBURYPORT -- In most circumstances, listening to music during class would lead to a stern reprimand -- but not for 8th graders at Immaculate Conception School in Newburyport. Ever since December, these students have begun building their own wireless Bluetooth speakers, thanks to a partnership with Rochester Electronics, an international semiconductor manufacturer headquartered in Newburyport.

"It is really quite exciting going through the process of what Bluetooth actually is, how to build a working wireless Bluetooth speaker. The students have been fascinated," said Nina Reidy, science teacher for the upper grades at Immaculate Conception School.

"He is very much like a patron of our school," she said.

The project began with a field trip to Rochester Electronics, explained Reidy, in which students toured the facility and were shown all the different technologies used by the company, she said.

Students then were given a class assignment to research the exact definition of "Bluetooth" and what problems Bluetooth capability solves in society.

Shortly before Christmas, Rochester Electronics bought each of the 23 eighth graders a packet equipped with all the components to build a wireless Bluetooth speaker, Reidy explained. Each student is responsible for bringing their own enclosure made of wood or plastic that will house the speaker.

"The students learned not to use anything made of metal because it blocks Bluetooth signal," she noted.

Beginning in January, two employees at Rochester Electronics, Gary Francoeur and Loren Krott have served as the liaisons between the school and the company, visiting the school on Wednesdays during science lab in order to help the students assemble the speakers.

"They often bring two or three other adult mentors with them so that each mentor sees three or four students," she said.

"They have been really nice to the kids," Reidy said. "They have become mentors to many of our students as they assemble, build, test, make mistakes, rebuild, retest and ultimately, we hope, finish their wireless Bluetooth speakers."

Reidy is hopeful the speakers will be completed by next month.

For Reidy, who has been teaching at the elementary school for the past 13 years, this is but one example of the hands-on science taught at Immaculate Conception School.

"Science is an adventure," she said. "You have to be open to learning and building and moving things. It's our future."