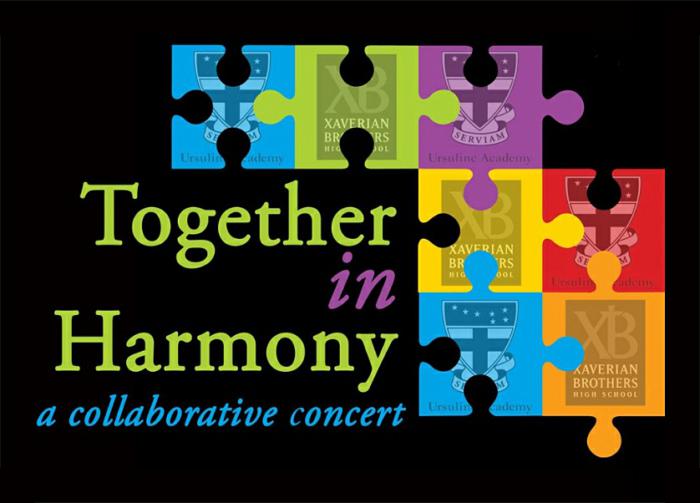 DEDHAM -- Weeks of planning and collaboration between two Catholic schools, Xaverian Brothers High School in Westwood and Ursuline Academy in Dedham, will soon come to fruition when choruses from the schools hold a joint concert, Feb. 2.

Called "Together in Harmony: a Collaborative Concert," the performance will feature performances by the Ursuline Academy Choral Group and the Xaverian Brothers High School Chorus, as well the schools' a cappella groups: Ursuline's Bearitones and Xaverian's X-Men.

The concert will be unique, not only because it is uniting two schools in music, but also because Xaverian is an all-boys school, and Ursuline is an all-girls school.

"When I was first hired at Xaverian, I dreamed about the possibility of having a collaborative concert with an all-girls high school, and now it is becoming reality," said Xaverian music teacher John Broduer.

"This collaboration is so important. On a pedagogical level, our young men should experience what is like to sing with young women. On a more profound level, the collaboration challenges students to recognize that music is about people, bringing people 'together in harmony,'" he continued.

Susan Glancy, Fine Arts Department chairperson at Ursuline, told The Pilot Jan. 20 that her son attends Xaverian, and was able to connect with Broduer because of that.

She noted that in September, the two chorus groups participated in a day-long retreat that was run by Broduer and herself. Students took part in a variety of activities and rehearsed songs together, two of which came to be incorporated into the upcoming concert.

Glancy hopes the retreat will be a yearly event, and said the schools plan on doing additional collaborative concerts in the future.

"I think this is just the beginning," she said, "We're looking forward to it, and I think the kids are, too."