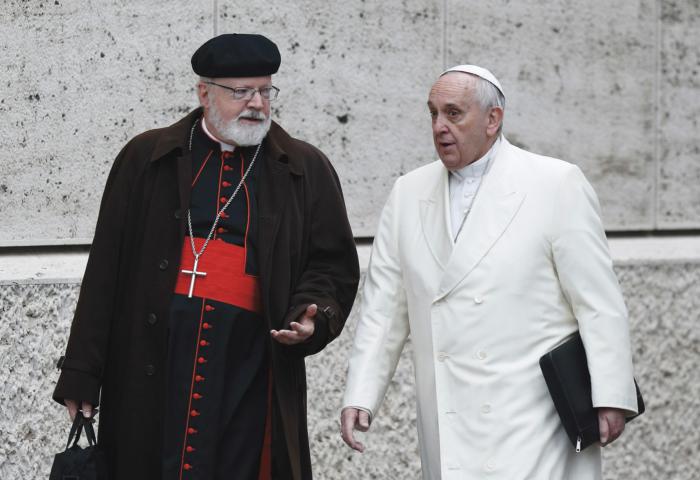 Pope Francis talks with Cardinal Seán P. O'Malley as they arrive for a meeting at the Vatican in 2015. Pope Francis appointed Cardinal O'Malley to serve on the Congregation for The Doctrine of The Faith Jan. 14. CNS file photo/Paul Haring

BRAINTREE -- Cardinal Seán P. O'Malley expressed his gratitude to Pope Francis for appointing him a member of the Congregation for The Doctrine of The Faith and said he hopes to serve as a bridge with the Pontifical Commission for the Protection of Minors that he presides. The appointment was announced at the Vatican Jan. 14.

"I was very honored to be asked by the Holy Father to be a member of the Congregation for the Doctrine of the Faith and I hope that I will be able to make a positive contribution" he told The Pilot Jan. 17.

Pope Francis created the Pontifical Commission for the Protection of Minors in March 2014 as an advisory body at the service of the Holy Father and tasked it to propose initiatives "for protecting minors and vulnerable adults, in order that we may do everything possible to ensure that crimes such as those which have occurred are no longer repeated in the Church," according to the chirograph, a form of papal decree, that established the commission.

The document also asked that the commission "promote local responsibility in the particular Churches, uniting their efforts to those of the Congregation for the Doctrine of the Faith, for the protection of all children and vulnerable adults."

The Congregation for the Doctrine of the Faith is primarily charged to promote and safeguard the doctrine on the faith and morals throughout the Catholic world but it is also responsible for dealing with cases of clergy accused of sexual abuse of minors.

"The Holy Father's request that I be there shows that he is anxious for the different offices of the Holy See to work together, particularly around this issue," the cardinal said.

The cardinal, who also advises the pope as part of the Council of Cardinals, said that "part of the reform of the Curia has been trying to overcome the silo effect and make sure that people are working together and communicating when dealing with the same issues."

Msgr. Robert W. Oliver, secretary of the Pontifical Commission for the Protection of Minors, told Catholic News Service Jan. 17 that while the congregation members offer their expertise on the many questions the office considers pressing, Cardinal O'Malley's experience leading three U.S. dioceses confronting the abuse of minors by clergy will be important.

Msgr. Oliver, a Boston priest, once worked as the chief prosecutor of sex abuse crimes when he was promoter of justice at the doctrinal congregation, as well as on the abuse crisis in the Archdiocese of Boston with Cardinal O'Malley.

The cardinal will bring "the experience of local bishops who have been there" in terms of handling abuse accusations, and will help the congregation as it deals with new cases coming in from different parts of the world, the monsignor said.