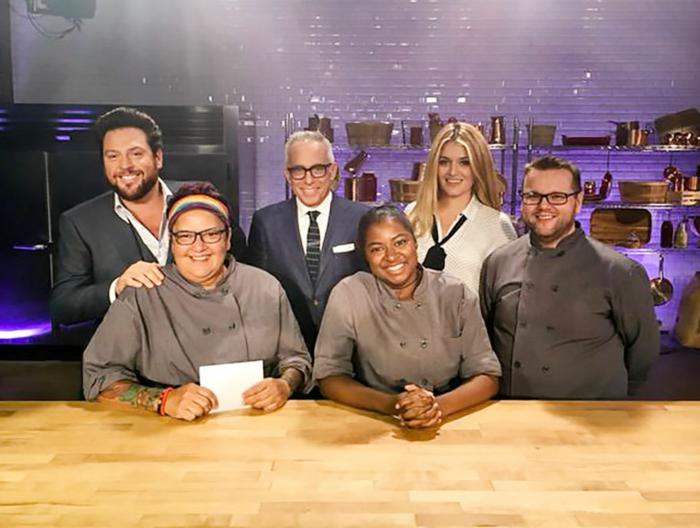 Notre Dame Academy president Jamie Collins (right) is pictured with the cast and other contestants on the set of the Food Network's "Cooks vs. Cons." Courtesy photo

HINGHAM -- When Jamie Collins, president of Notre Dame Academy, a Catholic all-girls school in Hingham, received a call from an unrecognized New York phone number a few months ago, he didn't pick it up.

It wasn't until he learned the call was from a casting agency and spoke to his wife, a social studies teacher at Cardinal Spellman High School in Brockton, that he took interest.

The casting agency was looking for people to be contestants in an episode of the Food Network show "Cooks vs. Cons" and said they had received an application from Collins.

"It's one of our favorite shows to watch together, and we were sitting on the couch one night and, unbeknownst to me, she filled out the application that the casting agency had," said Collins to The Pilot, Jan. 4.

The casting agency and the show's producer liked what they saw in Collins, and after several interviews, he was flown to New Jersey to be a contestant in the episode "Lunchbox Bonanza," which aired Dec. 28.

A relatively new Food Network program, "Cooks vs. Cons" pits four contestants -- two professional chefs and two "cons," or amateur chefs -- against each other to cook the best meal to win a cash prize.

The contestants' professions are concealed from the audience, the show's judges and its host, Worcester-born chef and restaurateur Geoffrey Zakarian, until the end of an episode.

Though Collins was one of the "cons," he said he did work in a few restaurants during his youth in Ireland, where he was raised. At 14, he worked in a hotel "washing dishes and peeling potatoes," later moving on to work in two different restaurants where he took on a variety of jobs in the kitchen.

"I just picked things up," he said.

He kept cooking over the years, and although he didn't win his episode of Cooks vs. Cons, his skills seemed to impress the judges.

In the episode, Zakarian and the judges speculate that Collins is a professional chef, and seem visibly shocked when he reveals at the end of the episode to be the president of Notre Dame Academy.

"It was a great honor. Here you have this guy from Ireland, a total blow in, invading a chef's space, and they liked (my cooking)," said Collins.

As for the students of Notre Dame Academy, Collins said that he thinks "they were taken aback by the level of competition" he showed.

"I've spoken to a couple of (students) passing in the hallways and they're like 'You've had them fooled, Mr. Collins!'" he said, laughing.