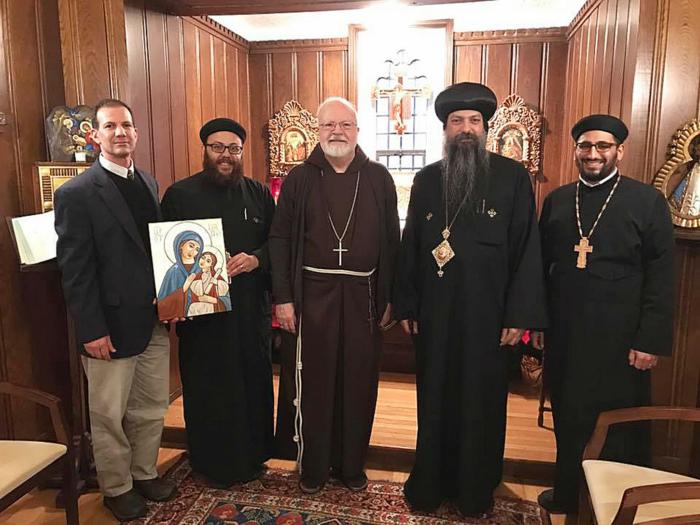 Vito Nicastro and Cardinal O'Malley are pictured with Father Samuel Hanna, Bishop David and Father Mina Kaddis of the Coptic Orthodox Diocese of New York and New England at the chapel of the rectory of the Cathedral of the Holy Cross, Jan. 3. Courtesy photo

BOSTON -- Meeting privately for the first time in an official capacity, Cardinal Seán P. O'Malley and the bishop of the Coptic Orthodox Diocese of New York and New England, Bishop David, discussed the building of a relationship between the two Churches, Jan. 3.

During the meeting, the two leaders stressed the importance of unity between the Churches, and Cardinal O'Malley expressed solidarity with the Coptic Orthodox Church, particularly in a time when Christians are being persecuted in the Middle East for their beliefs.

Just last month, a bomb blast in the Coptic Orthodox church of St. Peter and St. Paul in Cairo killed 27 people and injured dozens more. The Islamic State claimed responsibility for the act.

"Especially in these days, when the Coptic Orthodox Church of 15 million in Egypt lives under daily persecution, it is more important than ever to show our solidarity with this new member of the New England Christian community," said Vito Nicastro, associate director of Ecumenical and Interreligious Affairs for the Archdiocese of Boston and a coordinator of the meeting.

He noted that Cardinal O'Malley and Bishop David spoke in length about "the common challenges we face not just in persecution, but in witness to a society which more and more moves away from the common presuppositions of, I would say, religious discourse."

"So, the cardinal said we must shape a new apologetic, which includes a Christian anthropology. Once we shared this in our society, but now it is very far from the societal norm," Nicastro continued.

The meeting precedes the upcoming 2017 Week of Prayer for Christian Unity, Jan. 18 to Jan. 25, during which area Christian ministries and organizations, including the Coptic Orthodox Diocese of New England and the Archdiocese of Boston, will participate in unified prayer and gatherings.

The anchor event of the week, a joint ecumenical gathering hosted by the Archdiocese of Boston, will take place Jan. 21 at Holy Name of Jesus Church in West Roxbury. The event begins at 12 p.m. with a luncheon meeting followed by a 2 p.m. prayer service.