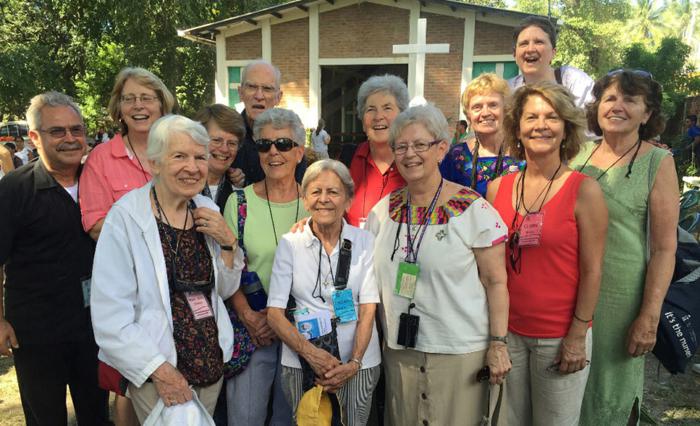 From Nov. 28 to Dec. 5, women and men from the Boston area were part of a delegation of 117 women religious and supporters who traveled to El Salvador for the 35th anniversary of the murder of four U.S. missionaries who were assassinated by the Salvadoran military for their advocacy on behalf of refugees and the poor.

Participants from the area included five Sisters of St. Joseph and two of their associates, one Sister of Social Service, one Sister of Charity who represented the New England Region of LCWR, Maryalice and Vincent Stanton of Watertown, and Claire White, of Cambridge. Claire White is the daughter of the late Ambassador Robert White, who was the U.S. Ambassador to El Salvador at the time of the murders.

On Dec. 2, 1980, Maryknoll Sisters Ita Ford and Maura Clarke, Ursuline sister Dorothy Kazel, and lay volunteer Jean Donovan were killed in El Salvador where they were living and working with the most vulnerable Salvadoran communities, especially children orphaned by the violence of the war.

After 35 years, justice continues to be sought for the murders of the four U.S. churchwomen, women, and thousands of Salvadorans killed during the war. During the week, the delegation visited sites and heard first-hand testimonies by people who knew these women. The group met with grassroots movement leaders, human rights defenders, and mothers of the disappeared. The delegation also explored root causes of migration to the U.S., learned of current challenges impoverished communities face, including increasing violence, and witnessed ways in which grass roots groups are organizing to build a better future.

The group spent a morning at the Monument to Truth and Memory in a central San Salvador park. The monument lists the names of more than 30,000 victims of El Salvador's civil war. At the site of Archbishop Oscar Romero's martyrdom on March 24, 1980, the delegation sat in the chapel, listened to a sister share the story of his assassination, surrounded the altar in silent prayer, and visited his humble living space. The group also visited the garden at the University of Central America where six Jesuit priest scholars, their housekeeper, and her daughter were murdered in the pre-dawn hours of Nov. 16, 1989.

At the parish on the site of their death, the delegation joined with parishioners in a liturgy to celebrate these women as "Witnesses of Hope."

The prayers of the faithful captured the essence of the celebration praying, "O God... We lift our voices and we beg, for the Salvadoran people, above all the poor. May God accompany them in their struggle to form a society based on justice for every person. We pray for the people of (this) parish...a place sanctified with the blood of the martyrs, that God continue walking among them sowing seeds of faith and hope." This sense of accompaniment and hope for the future marked every step of this journey.

The site of their murder and the tree under which their bodies were found was officially declared a Historical Site by the El Salvadoran Ministry of External Relations in an effort to ensure that their memory will remain alive for future generations.

In the village of Nueva Esperanza, Sister Elena Jaramillo, CSJ, a Sister of St. Joseph from Orange, Calif., commented, "I have found life here, life in abundance." She spoke of the letters she receives asking, "Is it safe?" and continued, "When someone is in the family is sick, is it better to stay away? No!" Sister Elena challenged all to take a look at why they wanted to come and see if the reasons are still valid. "It's hard here," she said, "but that does not give me reason to abandon my community. I'm here because I feel I can offer a little support to many people. Being afraid is no reason to stay away." She ended by challenging everyone, "to take a deep look at El Salvador, at what El Salvador can do to you."

Throughout the week the group experienced numerous moments of walking with the people as the group processed on roads to various places, listened to the stories of their survival, and attended press conferences calling for ongoing action in the quest for truth, justice, and reparation for cases that are still unsolved. Grassroots groups of women, youth, and local community activists shared how they continue to organize ways to move forward and build a better El Salvador for themselves and their children. These groups, in turn, support dozens of other groups building a web of solidarity throughout El Salvador.

The organization SHARE El Salvador connected the group with women and children who taught the delegation about the Salvadoran's determination, ability to organize, and desire for accompaniment in building a world that is more life-giving, full of justice, and full of hope.