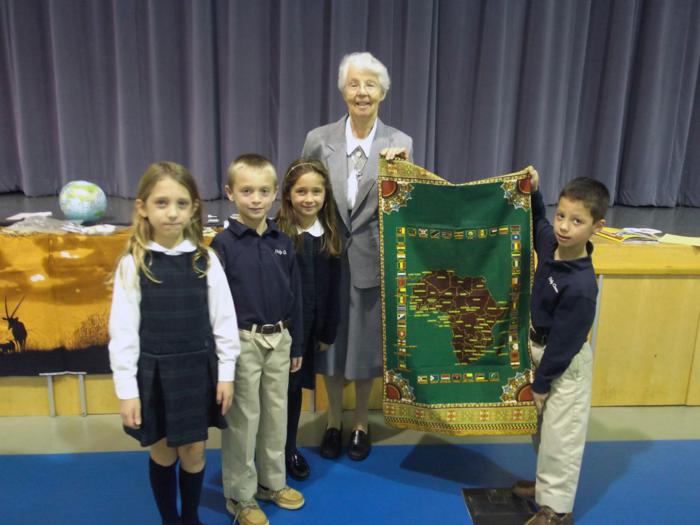 Sister Margaret Anne, MMM with some of her "student misisonaries". Courtesy photo

While preparing for my recent Jubilee celebration, my heart was overflowing with gratitude and joy for my call to follow Jesus in the MMM way of life. How did it happen? Why did Jesus choose me? Why am I the lucky one?

It is difficult to answer those questions, but perhaps it is due to little seeds scattered in my early childhood by devoted parents and teachers. All these seeds seemed to germinate in 1954 when I was a junior in high school, two Medical Missionaries of Mary came to show us the film "Visitation" and speak to us about becoming Medical Missionaries of Mary. The joy in them met with the joy and adventure of life in me and I was strongly attracted to join them.

As with all germinations there is a certain death process in that the gravity of what Jesus was asking of me to do with my life was not really what I had planned, being a nurse and mother. Yet I felt the Lord calling me to this life and something inside said, "Try it. You will never be happy unless you do".

After First Profession in Boston, I was sent to Dublin to begin Medical Studies. Upon completing internship at our International Missionary Hospital in Drogheda, Ireland and a Tropical Medicine Course the long awaited day of going to the Missions had finally come. Unfortunately, there had been a coup in May 1966, the day before the plane landed in Uganda, and the country was in civil war.

I loved working in a 100 bed hospital there and saw how the difficult times under the regime of President Obote and General Idi Amin Dada affected peoples' lives. We could have been shot many times but we never wanted to leave the people. Eventually I had to leave in 1978 because the American Government requested us to do so because they could no longer provide for our safety.

Soon I settled in Tanzania and learned to love the people there, too. There is a well-known saying that life begins at 40 and it was as if that happened to me. It was hard for me to change from one country to another. Unlike Uganda, our hospital in Tanzania was in a very rural area with poor roads so that when patients needed specialist services we could not transfer them to a hospital with these services. However, what was a wonderful help were the specialists who arrived in small Piper Club Planes to work with us and teach us new techniques.

In 1990 after 12 years in Tanzania, I was asked to go to Nigeria and care for Leprosy patients there, whom I came to love very much. Besides the intense heat, another challenge was working to eliminate Leprosy among the people in the villages and trying to introduce the care of these patients into the general public rural clinics. This was because persons suffering from Leprosy were ostracized from their communities.

I returned home to the USA and since 2002 I have done Mission Promotion in the schools and parishes. At every challenge it has been the same, Jesus still calls me to follow him in the MMM way of life which now I can share with others and hopefully attract others to see and seek God by being women on fire with the healing love of God.

Sister Margaret Anne Meyer, MMM is a member of the Medical Missionaries of Mary.