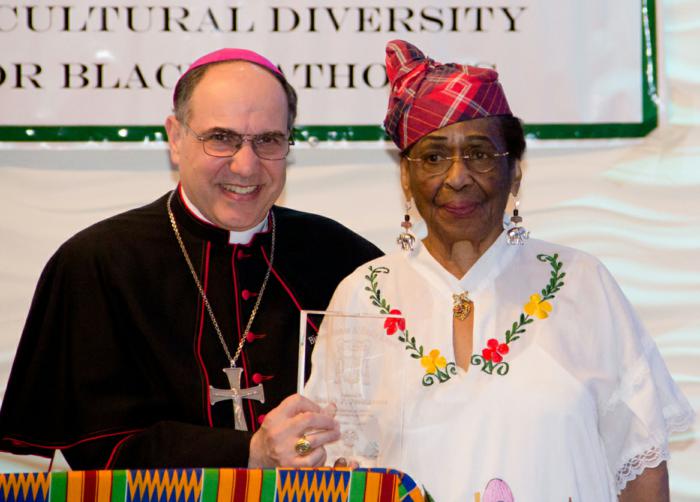 RANDOLPH -- Beulah Providence and Sister Margaret A. Leonard, LSA received recognition for their work on behalf of the Black Catholic Community of the Archdiocese of Boston during the 22nd annual Bishop James Augustine Healy Award Dinner, held Nov. 21 at Lombardo's in Randolph.

Providence, who is the founder and director of the Caribbean Foundation of Boston, received the Bishop James Augustine Healy Award, which is awarded to individuals who have provided strong leadership and service to the Black Catholic Community. The Caribbean Foundation helps find jobs and homes for members of the local and immigrant communities, and provides companionship and health care to the elderly and the disabled.

"For the past 43 years I have been blessed in directing the Caribbean Foundation of Boston ... At the present moment, we have about 700 clients," Providence said before accepting her award.

Sister Margaret received the Robert Leo Ruffin Award, which recognizes individuals who have offered significant service and sacrifice to the Black Catholic Community. Sister Margaret was formerly the executive director of Project Hope, an agency that provides low-income mothers with access to education, jobs, housing, and emergency services. She also serves on the board of the Pine Street Inn, Homes for Families, and the Dudley Street Neighborhood Initiative.

Over the years, Sister Margaret has received a number of honors recognizing her work, including honorary degrees from Assumption College, Tufts University and the University of Massachusetts, and a fellowship from the Barr Foundation.

The keynote speaker for the dinner was Adrienne Curry, the pastoral associate for Parish Social Ministry at the Cathedral of Christ the King in Kentucky and the former program director for Catholic Relief Services.

In her remarks, Curry praised the work of the evening's two honorees.

"Sister and Miss B have used their gifts to educate, mentor, and move people up and out of poverty," she said.

The archdiocese's vicar general, Bishop Peter J. Uglietto, gave the invocation on the behalf of Cardinal Seán P. O'Malley, who could not attend the event.

A message from Cardinal O'Malley was included in the dinner's program, thanking the Archdiocese of Boston's Office of Outreach and Cultural Diversity and the honorees for their work.

"Beulah and Sr. Margaret both share their devotion to our faith by helping each of us understand the call to discipleship and recognize the presence of Christ in all of our brothers and sisters," the cardinal said.

The event featured music and dance performances from several different groups, including The Karolines, Dominican Cultural Youth Group, and the Archdiocese of Boston Black Catholic Choir, as well as humorous remarks by the event's emcee, Joe Johnson.