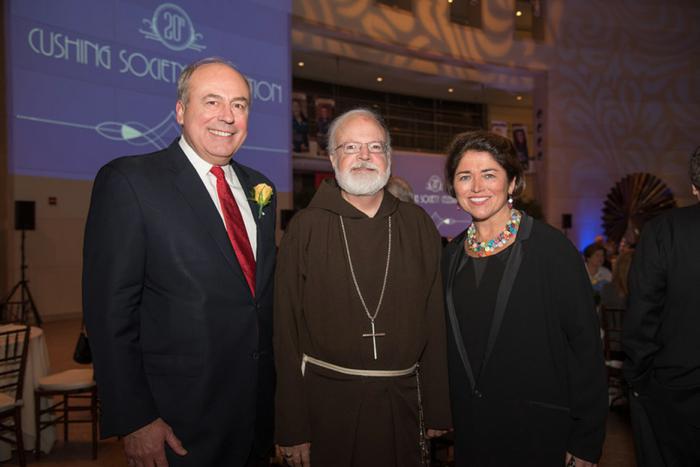 The 20th Cardinal Cushing Society celebration turned out to be a memorable night for St. Mary's High School in Lynn, as the school raised $2 million and announced it was dedicating a scholarship to the night's honoree, Cardinal Seán P. O'Malley.

St. Mary's Board Chair William Mosakowski announced the scholarship and the record-breaking fundraising amount in presenting Cardinal O'Malley the Cushing Award, which annually goes to a champion of Catholic education whose personal and professional life mirrors the mission of the school.

"Cardinal Seán has committed himself to supporting Catholic education, not only at St. Mary's but at all 120 Catholic schools in the archdiocese," said Mosakowski, who called the event the "most successful fundraising event in the history of St. Mary's."

More than 250 alumni, parents and community members attended the event, which was held at the Peabody Essex Museum in Salem Nov. 12. The Cushing Society celebration underscores the significance of Catholic education. It is also an opportunity for the school to recognize major supporters and their outstanding commitment to St. Mary's students.

"It's exciting to see the enthusiasm and support St. Mary's has in the community," said Cardinal O'Malley, who relayed a story about sitting next to Gloria Estefan at a White House dinner once and having no idea who the famous singer was.

"We live in a world addicted to celebrities .... You are my celebrities," he told the gathering.

Head of School Grace Cotter Regan hosted the program and expressed appreciation for Cardinal O'Malley's continuing willingness to support St. Mary's by attending key events such as the Cushing celebration.

"Another amazing night for St. Mary's," Regan said. "We were delighted to honor Cardinal Seán and recognize so many people who give so much to support our mission."