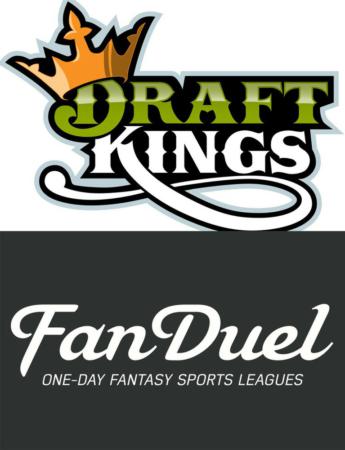 "At DraftKings we play for glory, for bragging rights, for fantasy football supremacy, but we also play for this -- the giant check. The giant check is no myth, no mirage, no fool's gold. It's our trophy, and many hoist it playing our one week games," says the narrator in a commercial for online fantasy sports site DraftKings.

While the narrator speaks, the commercial shows players discovering that they have won million dollar cash prizes and celebrating like they just won the Super Bowl. "Are your dreams big enough to cash a giant check?"

Another commercial claims that winning cash is as simple as drafting a fantasy team -- choosing a certain number of players from any team in a league with limits like a salary cap. Players pick a sport and enter contests with entry fees ranging from 25 cents to $5,000 and with prizes up to $1 million.

In an opinion piece in The Boston Globe, Mark Gottlieb wrote, "Research published in the Sports Business Journal found that a mere 1.3 percent of players win 91 percent of total player profits. These top players generally wager tens of thousands of dollars each week on hundreds of games. Their success relies on proprietary analytical software to choose their players and rapidly change their player lineups based on highly sophisticated algorithms."

Gottlieb, executive director of the Public Health Advocacy Institute at Northeastern University School of Law, said that the highly successful players have "rigged the game" and that fantasy sports companies mislead the public through their marketing.

Opponents are quick to point out that daily fantasy sports competitions differ from season-long fantasy leagues. They say the former relies more heavily on luck because they do not require long-term success. Gottlieb said these are games of chance, not skill as proponents say, and, therefore, illegal under Massachusetts law.

"Massachusetts law (General Laws ch. 271, section 7) prohibits any lottery or gambling unless the Legislature has specifically allowed it," he wrote in the column. "Another statute, (ch. 271, section 16A) prohibits betting pools where winning is determined by the result of the performance of individual athletes, which it describes as any contest based upon 'the skill, speed or endurance of man.' This goes to the heart of daily fantasy sports games, where success derives from the statistical performances of the athletes chosen by fantasy players."

John Tripp, head of No Casino, Somerset, Mass., said the skill involved in fantasy sports is no greater than in other forms of gambling, like poker. In both cases, too much relies on luck. A single fumble or interception could sink a fantasy team. "It's definitely a game of chance."

A DraftKings spokesperson refuted such claims, saying that fantasy sports is a legal game of skill, an opinion shared by Gov. Charlie Baker, who has played fantasy sports on DraftKings. The Boston-based company has been transparent about its game structures and has implemented safeguards, such as "strict deposit limits," to promote responsible game play, the spokesperson added.

Many sports leagues and teams seem to agree, striking deals with both rival site FanDuel and DraftKings. This season, DraftKings opened up a lounge at Gillette Stadium, and New England Patriots owner Robert Kraft has an equity stake in the company.

So far, seven states have banned daily fantasy sports -- Arizona, Iowa, Louisiana, Montana, Nevada, Washington and, most recently, New York, where 500,000 DraftKings customers reside. New York Attorney General Eric Schneiderman issued a cease-and-desist order to DraftKings and FanDuel, on Nov. 10. In a press release, he said that daily fantasy sports games "fleece sports fans" and cause "the same kinds of social and economic harms as other forms of illegal gambling." DraftKings plans to fight the order.

Massachusetts Attorney General Maura Healey has said her office has not yet completed its review of the new industry. Boston's FBI office has interviewed fantasy sports players. Other investigations are happening across the country, many of which were sparked by a controversy over a DraftKings employee hitting the jackpot on FanDuel.

Les Bernal, director of Washington D.C.-based Stop Predatory Gambling, said that fantasy sports games attract people in desperate financial circumstances who seek a quick fix but cannot afford it when they lose. The games are also particularly appealing to youth who are more likely to place a bet on their smartphone than go to a casino.

"The future of predatory gambling in Massachusetts and the entire country is based on turning an entire new generation into habitual bettors," he said, adding that online gambling brings exploitive games of chance everywhere, including the privacy of people's homes.

Stop Predatory Gambling released a report "Use Promo Code INEQUALITY" this month, which argues that regulating these predatory companies, as some have proposed, does not go far enough. The report calls on public officials to shut down fantasy sports operations.

Bernal, a Catholic and a Lawrence native, said people of faith should oppose the exploitation of their fellow citizens. "These kind of business practices are about loving yourself more than your neighbor."