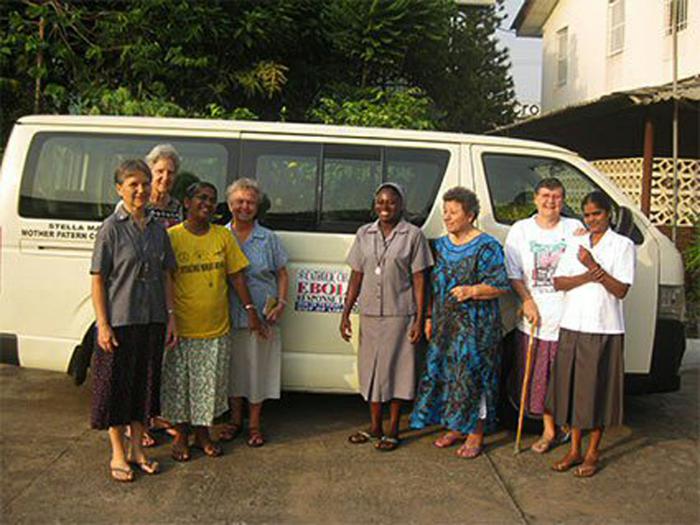 Franciscan Missionaries of Mary were founded in India by Helene de Chappotin, (Blessed Mary of the Passion) in 1877. This woman proved to have been gifted with a deeply intuitive and mystical orientation and a global vision. She would be the first woman to found a missionary congregation for women in the Church.

Mary of the Passion was deeply in love with God, and from her childhood this gift unfolded in her life. She wrote in the First Plan for the newly founded Institute (1877) that the Aim of the Institute makes it universal. She dynamically lived and communicated to the women who joined her the 'everywhere' of God's love, and in this perspective, a readiness to be sent anywhere in the world.

The first FMM community in the United States was in Worcester (then part of the diocese of Springfield) where the Sisters, immigrants themselves, worked among the immigrants. Poverty characterized both. In 1908 they were asked to open an orphanage in East Boston, especially among the Italian immigrants. In 1945 they were asked to care for the Archdiocesan eucharistic shrine of St. Clement in Back Bay. In addition to a collaborative deepening of eucharistic adoration with many lay people, they also provided services for neighboring parishes, worked with young women interested in missionary life, and many of the younger FMM continued their studies for professional qualifications as teachers, nurses, technicians, social workers, etc. In 1946 then Archbishop Cushing invited the FMM to the newly opened Kennedy Memorial Hospital, now Franciscan Hospital for Children in Brighton.

The Second Vatican Council (1962- 1965) asked all religious congregations of women and men to return to the sources of the inspiration of their Foundress/Founder, discerning the Founding Charism for each congregation. From this intensive work emerged concrete inspiration under the guidance of the Holy Spirit of how to live the particular grace given to each congregation within the mission of the Church in the modern world.

Today the FMM live in community in Brighton, not far from Boston College. Rapid changes in society find expression in the missionary spirit of the FMM called to different services. They continue sponsoring Franciscan Children's Hospital, and they also serve on the Board of Directors, and in the Mission Effectiveness Program of the hospital. They collaborate with the Franciscan Fathers at St. Anthony Shrine; they assist with other religious in various health care services, education and study. Solidarity with God's People spurs creativity in fidelity to the FMM Charism: young and old from many countries are welcomed for prayer and meals; they collaborate with the Sisters of St. Joseph in drawing attention to the evils and suffering of human trafficking. Whether attending to someone who is ill or dying, planting a garden to offer a hint about the importance of God's gifts in creation; listening to the story of another and allowing that person's pain to be felt; whether welcoming another or joining with others in efforts to take a position on the side of justice, peace and the integrity of all creation, the FMM have the grace to continue to serve in Boston.