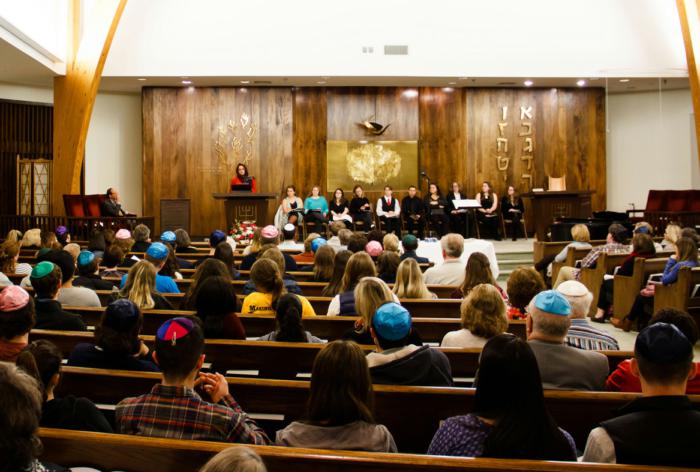 Dr. Mehnaz Afridi of Manhattan College speaks during the Kristallnacht commemoration at Temple Emanuel in Andover, Nov. 3. The gathering was sponsored by Center for the Study of Jewish-Christian-Muslim Relations at Merrimack College and Temple Emanuel. Pilot photo/Mark Labbe

ANDOVER -- An interfaith crowd filled Temple Emanuel in Andover, Nov. 3, as students from Merrimack College, a Catholic college, gathered at a Jewish synagogue for a service and to hear a reflection by Dr. Mehnaz Afridi, a Pakistani-born Muslim.

Sponsored by the Center for the Study of Jewish-Christian-Muslim Relations at Merrimack College and Temple Emanuel, the service, entitled "Shattered Glass, Shattered Lives," was part of the school's annual Kristallnacht-Holocaust Remembrance event. The 77th anniversary of Kristallnacht, or the "Night of Broken Glass," falls on Nov. 9-10.

Rabbi Robert Goldstein, who presided over the service, offered the story of Kristallnacht.

"On the night of Nov. 9, 1938, and into the early morning hours of Nov. 10, the dark silence was broken by the sound of shattering glass. On this night of shattered glass, Kristallnacht, Nazis smashed the windows of Jewish homes, stores, buildings, and synagogues throughout Germany and Austria. At least 91 Jews were killed in the attacks, and further, 30,000 arrested and incarcerated in concentration camps," said Rabbi Goldstein.

In her reflection, Afridi, who is the director of the Holocaust, Genocide, and Interfaith Education Center of Manhattan College, acknowledged the horrors of Kristallnacht and the Holocaust, and delved into the topic of interfaith relations between Muslim, Jewish, and Christian people.

She said there is a need for more interreligious dialogue, and offered stories of instances where people of different faiths worked together in an attempt to achieve peace in situations of turmoil.

She said she finds hope in "Jews, Muslims, and Christians who are working together in Syria, the United States, Israel, Palestine, Iran; the recent celebration of "Nostra aetate" with millions of Christians and Jews acknowledging one another in the face of long standing suffering; (and) Israelis and Palestinians working together to create a peaceful process on the ground."

"What I offer you tonight is the hope and vision of peace in the remembrance of those who suffered the most terrible deaths," she said.

"Nostra aetate," or the "Declaration on the Relation of the Church with Non-Christian Religions," that was produced by the Second Vatican Council, acknowledges the unity of all people, and acknowledges the special bond between Jewish and Christian people. The 50th anniversary of the declaration was celebrated on Oct. 28.

Merrimack students also participated in the service, with Lindsy Goldberg, '15, reading from the Book of Genesis and Samuel Tankel, '19, reading a quote from the German Christian pastor Martin Niemoller.

Students also took part in a Ceremony of the White Roses.

During the short ceremony, students brought up six white roses to the front of the synagogue, one each to signify the victims of genocides or mass killings in Armenia, Cambodia, Rwanda, Bosnia, Darfur, as well as the displacement and killing of Native Americans.

After the roses were placed, members of the assembly were invited to write down the names of groups or people who were persecuted. A final rose was then brought up in remembrance of those people.

The service came to a close following the Mourner's Kadish, a prayer said as part of the mourning rituals in Judaism, and a final prayer and blessing from Rabbi Goldstein.