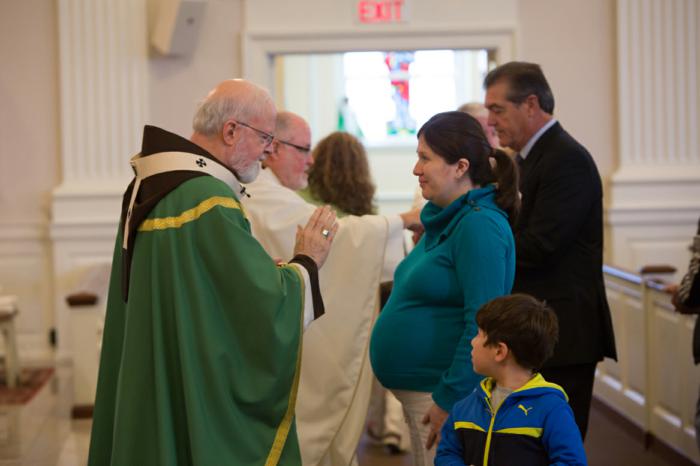 'On Sunday (10/25), I gathered with supporters of our Catholic Appeal for a Mass at St. Bridget's in Lexington. The event was a chance to thank them for all their support of our Appeal, which is the lifeblood of the archdiocese.' Pilot photo/CardinalSeansBlog.org

...I travelled to Pittsburgh because my Capuchin Province was having their annual celebration of jubilees, and they asked me to celebrate the Mass. We had several Friars celebrating significant anniversaries but the one who was celebrating the most years of service was Father Angelus Shaughnessy. He was celebrating 60 years of ordination and 65 years of religious life. Father Angelus worked for some time with Mother Angelica and EWTN, and his television Masses were always very popular.

On Sunday (10/25), I gathered with supporters of our Catholic Appeal for a Mass at St. Bridget's in Lexington. The event was a chance to thank them for all their support of our Appeal, which is the lifeblood of the archdiocese. After the Mass, we had a luncheon where I had a question and answer session with the people.

... Isabel Gil, the vice rector of the Catholic University of Portugal in Lisbon came for a visit. The university was founded in 1967 -- the 50th anniversary of the apparitions at Fatima -- and there were a number of local people who were great supporters of the university, including Cardinal Medeiros and Joe Fernandes of the Fernandes Supermarket chain. For many years we had an annual fundraising event between Boston and Fall River to help support the university. Now, as they are preparing to celebrate their own 50th anniversary in 2017, they are interested in reinvigorating ties with the Portuguese speaking community in the United States, and they came to speak to me a little about that.

On Tuesday (10/27), we had a meeting here at the Pastoral Center of leaders of Hispanic ministries from the 11 dioceses of the Boston and Hartford Provinces. This meeting was part of the preparation leading up to the Fifth National Encuentro for Ministry Among Hispanics/Latinos (which is usually abbreviated to the more manageable form, "V Encuentro"). I have had the privilege of attending each of the four previous Encuentros, the first being held in 1972 in Washington. Each of them has given new energy, impulse and direction to Hispanic ministry in the United States. This is particularly important at this stage of our development as a Church in the United States, where such a huge percentage of the Catholic population is Hispanic. With the many challenges that we have, this Encuentro will be particularly important. I was so happy to see the enthusiastic response of the attendees from so many different dioceses.

Tuesday evening, I had one of our regular meetings with our recently ordained priests here at the Pastoral Center. As always, we began our gathering with a Holy Hour in front of the Blessed Sacrament, followed by dinner and discussion. We conducted a survey among them talking about the joys and challenges of being a young priest and how they deal with those challenges. I was conducting the survey as part of the preparation for a presentation that I plan to give to the Congregation for the Clergy.

Also that evening, I attended a reception at Congregation Mishkan Tefila in Newton were they were presenting an award to Gerry Sheehan, and I was asked to say a few words. Gerry Sheehan has been an extraordinary benefactor of our Catholic schools. In my remarks, I noted this is the 50th anniversary of Nostra Aetate and that we have a wonderful tradition of friendship between the Catholic and Jewish communities here in Boston, particularly since the time of Cardinal Cushing. I said that Gerry Sheehan represents this kind of bridge between our communities and so we were so happy they were honoring him.