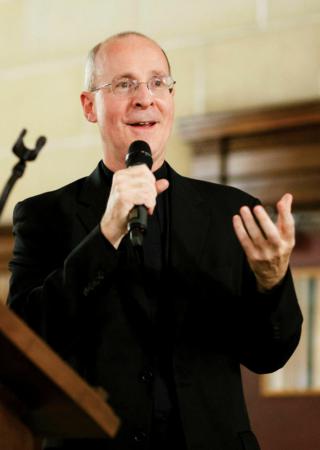 Father James Martin, SJ -- author, public speaker and media personality who has appeared several times on Comedy Central's "The Colbert Report" -- sat down with The Pilot following his talk at the Order of Malta's annual Mass and dinner Oct. 22 to speak about his writing, his ministry and his ties to the Boston area. He has authored several books, including "Between Heaven and Mirth: Why Joy, Humor, and Laughter Are at the Heart of the Spiritual Life" and "My Life with the Saints," which was named one of the 2006 Best Books of the Year by Publishers Weekly. His most recent book, "The Abbey," is his first novel.

Q: What first inspired you to become both a priest and a Jesuit?

A: I was first attracted to the priesthood and religious life after I saw a TV documentary about the Trappist monk Thomas Merton. At age 27, I was working in human resources at GE in Stamford, Conn., and pretty miserable. And something about monastic life -- it seemed so beautiful and peaceful -- really called out to me. And when I asked my local parish priest about it, he said, "You might as well contact the Jesuits!" And when I met them, things just clicked.

At the beginning, I think it was the idea that you could do many things and be a Jesuit -- be a teacher, a missionary, a social activist, a physician, an attorney, as well as be a Jesuit. But in time, it became the Jesuits' distinctive spirituality that really kept me. And that led me to enter the Jesuit novitiate, in Jamaica Plain, in 1988.

Since I did my novitiate here, in Jamaica Plain, and worked in so many Boston ministries as a novice (such as Youville Hospital in Cambridge, the St. Francis House in downtown Boston and the Suffolk County House of Corrections in the South End) studied theology at the old Weston Jesuit School of Theology in Cambridge, and did countless retreats at Eastern Point Retreat House in Gloucester and Campion Center in Weston, Boston is really my spiritual home. I love coming back here. It's almost like whenever I come to Boston I feel like I'm on retreat.

Q: What led you to becoming a writer and public speaker?

A: My work as a writer started when my Jesuit superiors missioned me to work at America, which is a Jesuit publication in New York. I had only written one or two articles for them before that, but once I got there I realized that this seemed to be a kind of "vocation within a vocation." As for public speaking, I started when people asked me!

Q: "The Abbey" is your first novel, but certainly not your first publication. What led you into the world of novel writing?

A: Believe it or not, it started with a dream. I had a dream early one morning -- about a woman who loses her son in an accident and finds spiritual healing at a Trappist monastery -- and wrote it down. The next morning, I thought, "That's not such a bad story." And I started to write it the next day. It was a great deal of fun. As much as I've enjoyed, loved, writing my other books it was much more enjoyable and looser than non-fiction!

Q: How did you find the inspiration for your characters? Are they derived from any particular people in your life?

A: They were all given to me -- pretty much fully formed in the dream. And so was the setting. In the dream (though not in the novel, since I had to change things a bit) the monastery is St. Joseph's Abbey in Spencer, Mass. As in most dreams, they were loosely based on people I know, but then filtered through my subconscious. Then, of course, I gave them depth and wholeness, as well as their own struggles and challenges, for the novel. Now, I feel like they're almost like real people, and, though it may sound strange to say, I really love all three of them.

Q: In your talk to the Order of Malta, you said, "I love the pope!" What is it about Pope Francis that you love?

A: I love his simplicity and authenticity. Every pope, of course, brings something unique to the office. For Francis it seems to be a way of connecting with people immediately, on a very deep level. Also, Francis embodies that great Jesuit virtue of being free. St. Ignatius Loyola, the founder of the Jesuits, always invited people to be, as he said, "detached" from anything that would keep that person from responding to God's will. So the pope is, to my mind, free.

I also like the way that the Holy Father uses Jesuit spirituality in very subtle ways. One example: for Jesuits and our colleagues, it's important to let people have their own experiences of God. So, for example, you'll hear the pope say, "Imagine what it was like to be with the women at the Tomb on Easter Sunday." Rather than saying, "This is what it was like for people on Easter Sunday." That's very Jesuit! It's very moving for me to hear the pope invite so many of us to enjoy some of the insights of Jesuit spirituality, in very subtle, unobtrusive ways.

Q: Do you think his message is bringing the Church closer to people?

A: Absolutely. Every pope, besides bringing something different to the office, appeals to a different group of people. And I've had many people tell me that they've come back to the Church because of Francis. And that's all to the good.