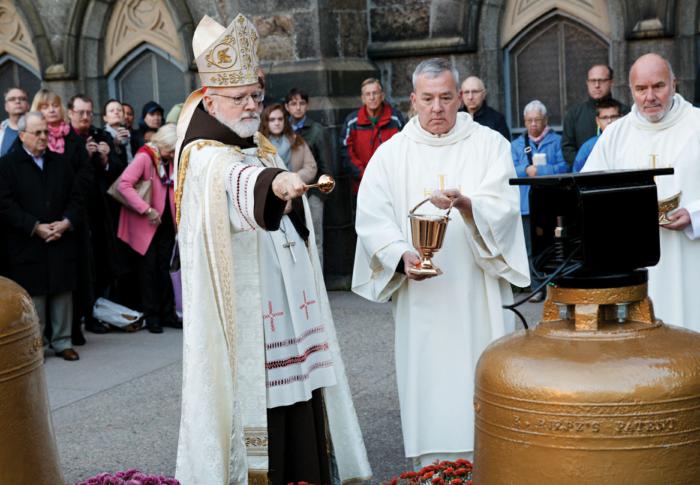 Cardinal Seán P. O'Malley sprinkles holy water during the blessing of bells from the former Holy Trinity Church in Boston that will now hang in the Cathedral of the Holy Cross. Pilot photo/Gregory L. Tracy

SOUTH END -- At a solemn Vespers service Oct. 18 at the chapel of the Cathedral of the Holy Cross, Cardinal Seán P. O'Malley blessed five bells from closed Holy Trinity Church that will soon ring once again in the cathedral bell tower.

The bells, which will be the first bells installed in the cathedral -- the sound of bells at the cathedral until now have been created by an electronic carillon -- have a storied history.

Markings on the bells identify them as having been made by Naylor, Vickers and Co. of Sheffield, England.

According to the archdiocese, the bells came to Holy Trinity Church during the Civil War. General Benjamin F. Butler, former governor of Massachusetts, was military commander of New Orleans after its occupation by the Union troops. Displeased with the unfriendly attitude of a certain section of the city he punished them be confiscating the old bells of their parish church. These bells were shipped to Boston and offered for sale. Father Ernest Reiter, SJ, the pastor of Holy Trinity Church, bought them in 1863 for $1,500 and put them in the tower.

The church served as the home for Boston's German Catholic community for many decades until it was closed in 2008. Today, former members of the Holy Trinity Parish worship at the Cathedral of the Holy Cross.

In his homily at the Vespers service, the cardinal spoke of role the bells will play once again as tools of evangelization.

"The bells that ring in this tower are going to be bells that invite people to remember the presence of God in their lives and invite them to the feast, the banquet, the Eucharist that we celebrate here with Jesus the divine bridegroom," he said.

He also spoke of the shared memories of many Catholics, recalling that bells are rung to mark significant moments, both of joy and of mourning.

"These bells will serve this same purpose here in the Cathedral of the Holy Cross. They will ring out reminding people that God is in the midst of the city, that in this community of faith people are invited to come, to worship, to be healed, to listen to the word of God, to educate their children, to find food if they don't have it, or medical help if they need it, to find forgiveness, to find community where they can be accepted and loved," he said.

The cardinal explained that each of the bells has been named after a saint in honor of the bells' history or mission. He said the bells would be named for:

-- St. Gabriel, who is recalled in the Angelus prayer, for which bells are traditionally rung each day at noon;

-- St. Helena, who found the relics of the Holy Cross after which the cathedral is named;

-- St. Therese, the patron saint of the missions, because the bells have a missionary function;

-- St. Boniface, the patron saint of Germany, because Holy Trinity Church was the home of Boston's German Catholic community for many years; and

-- St. Joseph, the patron of the Universal Church and protector of the Holy Family.