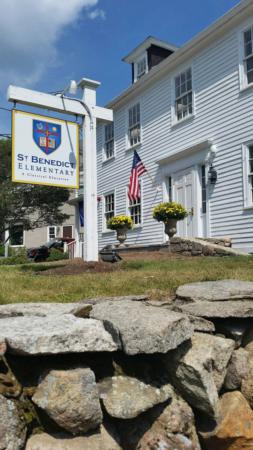 St. Benedict Elementary School in South Natick, founded in 2013, was recently approved by Cardinal Seán P. O'Malley as an independent Catholic school in the Archdiocese of Boston. Pilot photo/St. Benedict School via Facebook

Since its inception in 2013 the school's enrollment has grown from 26 students to 60 students. Along with the growing student population, St. Benedict Elementary has expanded its faculty, staff and administration. Key among these new hires is Headmaster Jay Boren, who started his position in July.

Boren, who re-located his family from Mobile, Ala., to accept the position, said, "I was initially drawn to this position leading St. Benedict Elementary by my firm belief that a classical Catholic education forms the whole person and produces students who are distinctively prepared to engage our world and positively transform it."

Boren explained that what eventually inspired him to accept the position was a realization he had upon visiting the school in person.

"It was clear to me that something truly great is being formed here: a school that I believe will change the landscape of primary school education in the region, a school that I can see is positively transforming the lives of the families who make it up. This is exactly the type of school I wanted to be a part of and lead," he said.

An Alabama native, Boren received his B.A. in Philosophy from St. Joseph Seminary College and his MA in Liberal Arts from Spring Hill College. Boren is a veteran educator and spent 12 years in the classroom as a theology teacher at his alma mater, McGill-Toolen Catholic High School in Mobile. During his time at McGill-Toolen he also coached football and softball and was assistant athletic director. Boren and his wife -- also a primary school educator -- and young daughter live in Lowell.

Boren, who has served many years in a diocesan school environment, knows firsthand the tangible and spiritual benefits of being able to declare unity with the Church formally.

"We are overjoyed at receiving formal recognition from Cardinal Seán. The Church and her teachings inspired the very creation of our school. Having approval from the Cardinal is a great help in furthering our mission," he said.

St. Benedict Elementary founding parent Kristine DeMatteo noted that in addition to celebrating this formal designation, the community also expresses its sincere gratitude for the many ways the archdiocese supported the school leading up to this milestone.

"The Archdiocese has been enormously supportive of our efforts at St. Benedict since we opened our doors in September 2013," DeMatteo said. "Bishop Walter Edyvean's initial blessing just after our launch, visits by a good number of diocesan priests, and Superintendent Kathy Mears' enthusiastic embrace of St. Benedict's classical approach to Catholic education heartened us all through those initial years."

Boren sees a bright future ahead for St. Benedict Elementary and has many ideas about how the school might continue to expand and enrich its current program. This year he is focused on thoughtfully growing the school's enrollment, creating new co-curricular and educational enrichment opportunities, and offering the already accomplished faculty and staff continued opportunity to cultivate their teaching craft and classical methodology.