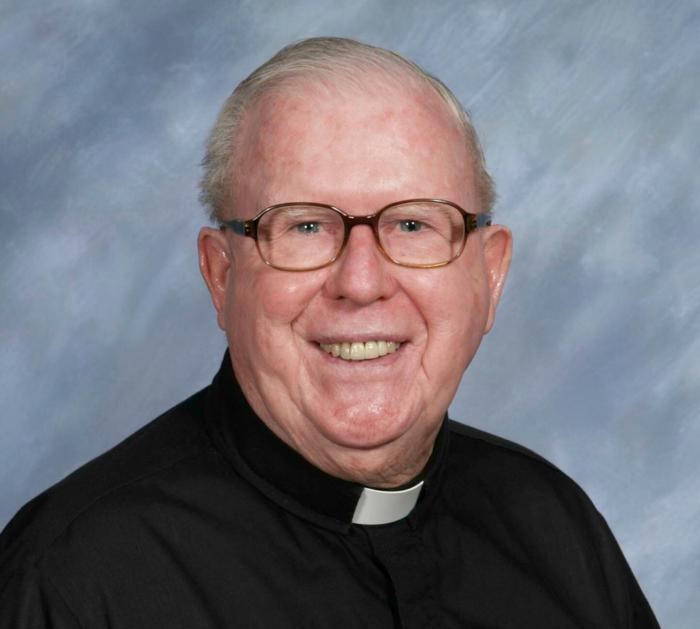 One of the "greatest generation" Father Robert Costello died at his home in Nahant on Sept. 18. He was 90 years old.

Born in Woburn on Nov. 13, 1924, he was raised in neighboring Winchester. His parents, both deceased, were William and Margaret (Dirane) Costello. He attended local schools and was graduated from Winchester High School. After high school he enrolled in the U.S. Army and was a member of the 30th Infantry Division. That division landed on Omaha Beach during the D-Day invasion on June 6, 1944 -- he was six months shy of his 20th birthday. As so many he fought courageously in the Battle of St. Lo; injured during the battle, he recovered and was awarded a Purple Heart.

He returned home and entered Boston College from which he was graduated in the Class of 1948. He entered St. John's Seminary, was a member of the "First" Class of 1953, ordained on Feb. 2 that year at the cathedral by Archbishop Cushing. There was a fall class of 1953 ordained in September. They would have been the class of 1954 but there was not enough room in the seminary for the incoming classes.

Bishop Richard Lennon, apostolic administrator of the archdiocese, granted him senior priest/retirement status on Jan. 13, 2003. Since he retired he has been available to parishes across the archdiocese to celebrate daily and weekend Masses.

Father James O'Leary, pastor of St. Camillus, Arlington was among the pastors who welcomed Father Costello to assist or substitute. "The parishioners really took to him. He was a gentleman and very kind. If he heard confessions there was always a longer line." Father O'Leary's right hand man at the parish, Richard Spinale was even more expressive about Father Costello. "I remember one year during a confirmation program he came to hear confessions of the teenagers. They liked him so much that they asked for him to be the celebrant of the Mass during their retreat prior to Confirmation. He was already in his early 80s by then."

Richard further recalled, that "he loved to sit and chat about his assignments and the many friends and some characters including priests from the places where he served."

Father Costello had an all-star cast of priest friends. Some were classmates, others seminary contemporaries, all of whom preceded him death; among them were Fathers Alfred Puccini (with who he served at St. Monica, South Boston); Angelo Losccoco; and Kenneth McAskill.

He is survived by his sister, Anne Kelly of Melrose and several nieces and nephews. Following the funeral Mass, Father Costello was buried in Wildwood Cemetery, Winchester.