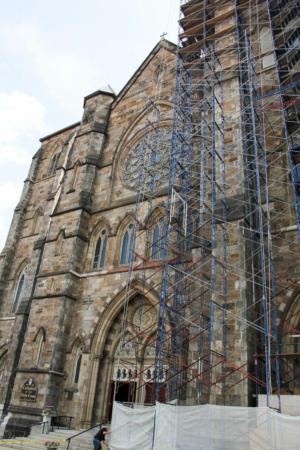 Scaffolding covers the bell tower of the Cathedral of the Holy Cross as workers continue their restoration work that is scheduled to be completed by November. Pilot photo/Christopher S. Pineo

SOUTH END -- The Cathedral of the Holy Cross is slated for a $2 million face lift with the work to be completed by November.

Cathedral rector Father Kevin J. O'Leary has been at the Cathedral of the Holy Cross since 2008, and said the growth of the ministries at the cathedral parish has increased participation and visibility of the cathedral in the neighborhood. As that growth occurred, the need for the restoration became more obvious.

"We see people moving into this area, and people really want to be involved in a life of service," Father O'Leary said.

Ministries at the cathedral include a partnership with Catholic Charities for a food bank, a free medical clinic, a community of Eritrean and Ethiopian Ge'ez Rite Catholics, an apostolate to the German community, Spanish-speaking ministries and Masses, and a community that celebrates the Latin Mass.

Father O'Leary said the funds for the renovation come mainly from donations by a small group of local businesspeople. Because some donors wished to remain anonymous, he declined to name them individually.

"We just found little niches of people who gave, and that's how it happened," he said.

The Folan Waterproofing and Construction Company, Inc. will lead the project. Father and son owner Patrick J. Folan and senior project manager Patrick J. Folan III spoke to The Pilot Sept. 1 interview alongside Father O'Leary, and provided a tour of the construction site to see the work being done first hand.

Some of the dust and grime built up on the cathedral as the Washington Street Elevated ran by the location from the early 1900s until 1987. That, combined with pollution from the day-to-day traffic in the city, created a layer of grit and grime that has coated the cathedral.

The younger Folan said that layer had to be removed to truly see the other restoration needs of the cathedral, such as identifying hairline fractures in the mortar between stones and other facade issues that could contribute to the leaks.

"Once there's a fracture or a crack, once water gets in that area, you get a freeze-thaw cycle at night. The freeze just kind of pops it. It thaws back out during the day, water starts moving around again," the younger Folan said.

The cathedral incurred some water damage over this past winter as a result of that cycle.

"Overall the structure of the building was great. It was just the stones were tired and deteriorated and a lot of the mortar joints were cracked and failed, so that was allowing water to penetrate through the building," he said.

Much of the work to be done will focus on exterior restoration of the granite, limestone, brownstone, and -- locally sourced -- Roxbury puddingstone, to include waterproofing.

Other improvements will include the installation of bells from the nearby closed Holy Trinity Church in the cathedral and new exterior lighting.

The bells recently retuned and restored at The Verdin Company of Cincinnati, Ohio had been returned. And are now being stored at a warehouse nearby, while contractors reinforce the belfry with steel and wood structures. Folan said the bells should be installed in the coming weeks.

"It's exciting though, isn't it for the diocese and for the cathedral?" Father O'Leary asked.

He said the work at the Cathedral of the Holy Cross supports the vision of Cardinal Seán P. O'Malley for the cathedral to be the flagship of the Archdiocese of Boston.

"Not only are we very excited, but the community -- people who aren't really affiliated officially with the Church -- are very excited," Father O'Leary said. 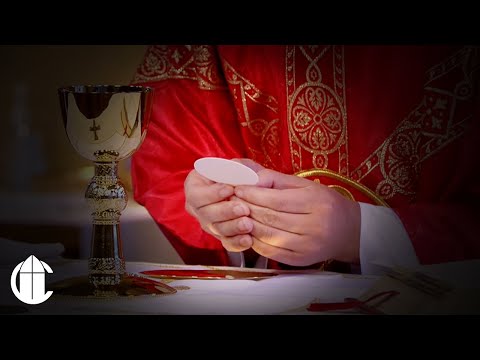