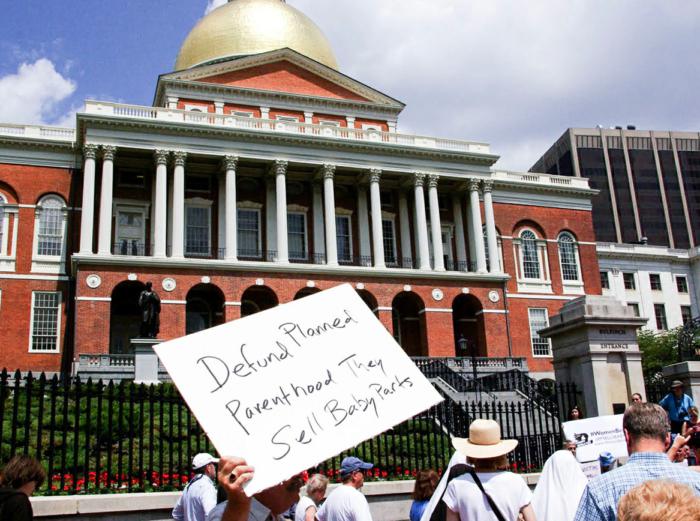 A participant in the "Women Betrayed" rally holds a sign outside the Statehouse in Boston July 28. Pilot photo/courtesy Edward Boylan

BOSTON -- Students for Life America hosted the "Women Betrayed" rally in front of the Massachusetts Statehouse, July 28, which called for the government to investigate and defund the nation's largest abortion provider. The rally was held in response to the release of a series of online videos showing Planned Parenthood officials speaking about controversial means of donating fetal tissue for research.

Margaret Palmer, a Newton native who studies at The University of Edinburgh in Scotland, organized the rally locally for Students for Life of America.

"I come from the perspective of a 21-year-old woman who is standing opposed to what people think most 21-year-old women want. The truth of the matter is that organizations like Planned Parenthood have been taking advantage of women from the get-go," Palmer told The Pilot Aug. 4.

Palmer used resources provided by Students for Life and Pro-Life Future at womenbetrayed.com to promote the event. Similar rallies were held at several sites throughout the nation, including Texas, Alabama and Ohio.

"The videos proved a bit of a catalyst, but they weren't the main real point of the rally," Palmer said.

Organizers said the videos released by the Center for Medical Progress only show "the latest infraction in a long list of horrific behaviors," which they said include covering up statutory rape, overbilling taxpayers, aiding and abetting sex traffickers, scheduling sex-selective abortions.

Organizers said Planned Parenthood receives over $500 million in government funds each year, which coincided with their most recent annual report.

Palmer explained the title of the rally in the context of what she said is the message many women encounter through Planned Parenthood -- that women cannot handle a crisis pregnancy.

"They profit off of telling women they are incapable of doing something. It's really not empowering or liberating at all, despite what people think," Palmer said.

"We, as women, are strong enough and empowered enough that we can handle a crisis situation. Obviously it's not ideal, but we can go forward and, with love and support, we can cope. Any woman can cope, but Planned Parenthood has chosen to exploit women and profit off of telling women that they can't and that they are incapable, which is not at all empowering and liberating. This is the way in which they have betrayed women," she said.