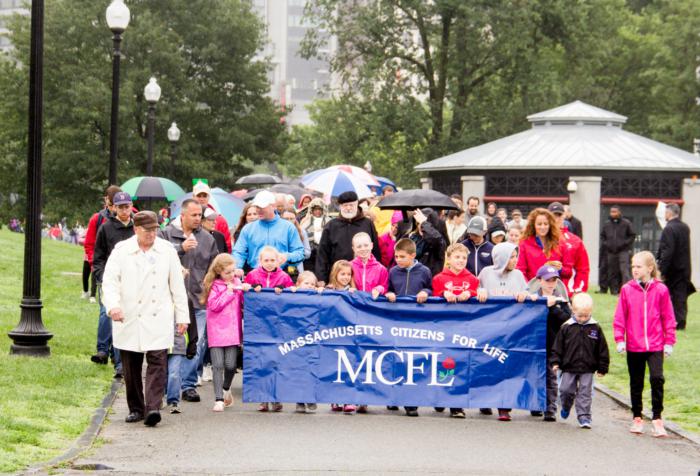 BOSTON -- Pro-life supporters from all over the state rallied and marched in public witness despite rain and clouds, June 28, at the Massachusetts March for Life on Boston Common.

"We gather here today with one voice to bear witness to the truth about life and the truth about love. Please Father, bless our gathering here today and, Lord, for every raindrop that we receive today, may a heart be converted for the Gospel of Life. Amen?" said Father Matt Williams, as the rally opened in prayer.

"Amen," responded the crowd of nearly 600 people, according to a Massachusetts Citizens for Life (MCFL) estimate.

The first Massachusetts March for Life developed from the Respect Life Walk to Aid Mothers and Children of previous years. The MCFL said the scope of the new annual march emphasized not just the threat to human life through abortion, but all threats to the sanctity of human life. Through participating organizations, MCFL, and individuals who walked, the march raised over $10,000 for the benefit of 16 pro-life organizations throughout Massachusetts.

Various pro-life ministries and organizations, including the Archdiocesan Pro-Life Office, had information tables during the rally before the 2-mile march through the Common and around the adjacent Public Garden, stopping in front of the State House for prayer and reflection.

Fox also read a statement from columnist Don Feder, a regular presence at past Respect Life Walks, who was unable to attend.

"Ladies and gentlemen, you of the right to life movement reflect our highest values. You are the heroes, proved in liberating strife. You are sacrificing in a just cause, and you exemplify mercy, compassion -- compassion for the unborn, the terminally ill, and others threatened by euthanasia," Feder said in his statement.

In his remarks, Rep. Lyons spoke about the obligation to take advocacy for human life into the public square, especially with regard to young people.

"How we fight this battle moving forward is going to lead the future generations in America either with what we believe in or what they are trying to force us to believe in. So, I want to tell you today, to all the young people out there, I want you to promise me one thing -- never, ever give up," he said.

The crowd heard the perspective of the youth and young people in the pro-life movement with remarks from Caterina Franks, 13; Tom Gaudet, a junior at University of Massachusetts; and Hanford Chiu, founder of the pro-life group Lex Vitae at Boston College Law School.

Fox also presented the crowd with the winner of the March Baby Contest Maura Armano, daughter of Jean Armano.

Cardinal O'Malley gave remarks and a blessing before the march left the Parkman Bandstand.

"Community and solidarity are the antidotes to abortion and euthanasia. The extreme individualism of the age tries to convince people that they are alone and the human condition is that, rather than seeing our lives as interdependent and living in solidarity. It's the same attitude that Pope Francis underscores on the encyclical on the care for creation. It's only as a community working for the common good that creation will be saved," the cardinal said.

The cardinal addressed the marchers' advocacy for life in the context of the papal encyclical Laudato Si'.

"It's only be helping each other and caring for those in crisis that the lives of the innocent unborn will be saved. We are here to help build a civilization of love. It's a huge task, but right is on our side, and we're so grateful to all of you for your willingness to stand up for the Gospel of Life, to be here even in the rain, to say to the world, I believe in life, and I am here to witness to that belief. God bless all of you," the cardinal said.

At scheduled intervals participants chanted, sang and prayed according to what Father Williams described as "marching orders" for the walk.

Leydi Hoil, a mother of three and a parishioner at Most Holy Redeemer in East Boston, said she attended the walk with her daughter to demonstrate and pass on the importance of Church teaching on the sanctity of life.

"It's very important to me, because she's growing up and I want her to be prepared," Hoil said.

Gabriel Starczewski, a 41-year-old father of four, brought his family into Boston from St. Peters in Great Barrington for the march. When asked why he found it so important to travel across the state with his whole family, strollers and gear, he began with one word, "Babies."

"We're here to support the cause," he said. "Personally speaking, I have known too many people who have thought it was OK to commit an abortion. We're here as a witness to say it's not. It's not a great choice. It's a bad choice and there are better choices."