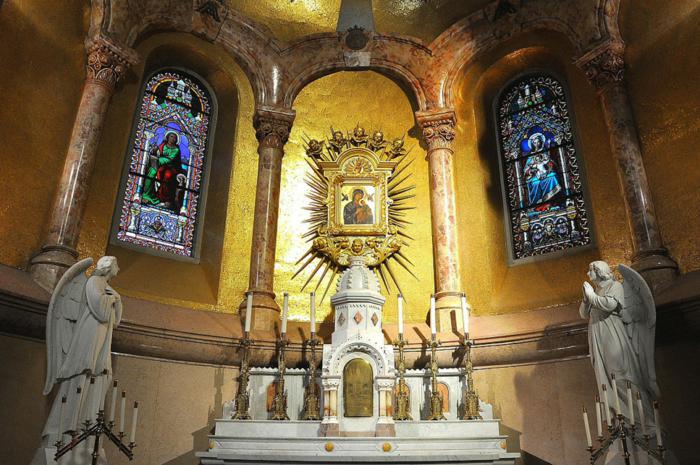 ROXBURY -- Every week for decades after World War II, thousands upon thousands of Catholics flocked to Boston's Tremont Street to venerate the Mother of God. On Wednesdays they came for one of nine novena services honoring Our Lady of Perpetual Help at the basilica of the same name. The congregation at the basilica, also known as Mission Church, regularly exceeded the 1,500 capacity and overflowed to the lower church. Busses that transported the crowds of up to 20,000 lined the streets of Mission Hill, waiting for the return trip.

Many sought healing and miraculous cures. A handful of miracles have happened there and hundreds of other visitors have reported health improvements that they attribute to Mary's intercession.

The left wing of the cruciform church is a chapel dedicated to Our Lady of Perpetual Help and above the side altar is copy of the icon of Our Lady of Perpetual Help. The original 14th century icon was stolen from a church in Crete and later displayed at the Church of St. Matthew in Rome, which was destroyed in 1789. The icon was rescued, and when the Redemptorist order built their new headquarters on the same site, they requested the icon be placed in the new church, San Alfonso. Pope Pius IX granted their request and told them to "make her known throughout the world."

That was 150 years ago and Redemptorists all over the world are observing the sesquicentennial of that gift. At Mission Church in Boston, the year-long celebration will begin with a Mass on June 20 at 4 p.m. Future lectures and other activities are in the works.

The building that now sits atop Mission Hill is the second church on the site. The first, a mission built in 1870, had so many visitors that a new, larger church was completed in 1878 and became a parish of the Archdiocese of Boston in 1883. The grand, Romanesque church has vaulted ceilings, ornate arches and a Hutchings organ with nearly 3,200 pipes. Beautiful stained glass windows were imported from Germany. There are statues, murals and intricate tile mosaic.

The icon is two feet tall and depicts Mary holding the child Jesus. Two angels -- Michael and Gabriel -- are on either side, carrying the instruments of Christ's crucifixion. Jesus appears frightened and Mary looks mournful. Next to the icon are dozens of crutches, which numbered 150 before renovations led to the removal of about half. The first miracle took place there in 1883 when Grace Henley, 16, unable to walk without assistance due to a crushed spine, stood up and walked out of the church.

Sisi Lappa-Maciolek, a member of the 150th anniversary celebration planning committee, said the story inspires visitors to this day. "People are drawn to that, and they come here all the time." Members of her family have worshipped at the basilica since 1880.

Redemptorist priest, Father Philip Dabney, CSSR, parochial vicar at the basilica, told The Pilot that the anniversary is an opportunity for the missionary order to celebrate its past and renew its mission to make Mary known.

In the basilica's heyday, worshippers came to hear Father Joseph Manton, CSSR -- the "novena priest" who preached there for 59 years. Services were broadcast on the radio. After the Second Vatican Council, public devotion to Mary began to fade and the neighborhood around the basilica changed too; higher crime rates kept some away.

The area is safer now with more college students and new groups of immigrants. Once largely German and Irish, the basilica's congregation is now comprised of members from Ethiopia, Haiti, Nigeria, the Philippines, Uganda and Vietnam.

Although the crowds are smaller, there are four services each Wednesday, and some of them are broadcast on CatholicTV. Many visitors continue to report improved health after praying there. Just last year, a woman fighting lung cancer came every Wednesday during the summer and reported to Father Dabney in November that her cancer was in remission.

He added that two years ago, a young man receiving bone grafts in his leg at a nearby hospital visited. The procedure was successful, and he left his crutch at the basilica because he believed that Our Lady had helped in the healing process. People often travel from nearby hospitals to pray before the icon for a child dying of cancer or a friend facing a serious operation.

Father Dabney said, "Every year there are people who suddenly become so deeply devoted because they came in a moment of desperation, and they found such consolation and support, not only by praying to the icon but from the community itself."