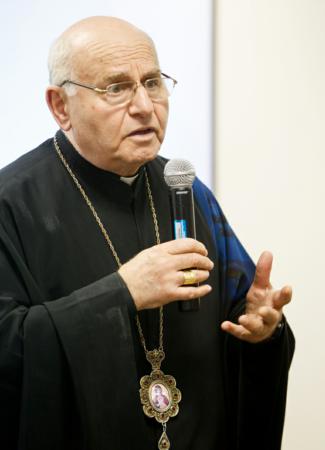 BRAINTREE -- The Melkite Archbishop of Aleppo Jean-Clement Jeanbart had settled in for retirement and succession in 2011, but the outbreak of civil war in Syria changed that, he told guests gathered at the Pastoral Center on April 23.

"What happened in Aleppo in Syria pushed me to get up again, and I went on working with all my strength to help our people," he said.

He spoke about the history of Aleppo, the legacy of the Christian community in the city, and Christianity in Syria at large. He said the first Christians baptized in Syria received baptism at the hands of the apostles, and he referenced St. Paul's ride to the city of Damascus where the apostle was knocked to the ground and encountered Jesus in a vision.

"Instead of arresting the Christians, he has been arrested by the Lord Jesus," the archbishop said.

The leader of the largest Church in Aleppo for the past 20 years, Archbishop Jeanbart oversees the provision of pastoral and humanitarian care to local Christians and Muslims suffering at the hands of the extremist group ISIS, the Islamic State. Once a commercial hub, the city lies in ruins as a result of the four-year running civil war in Syria.

In his talk, he highlighted support between Muslim and Christian citizens, and personal support he receives from local imams.

He called the soil of Syria "irrigated" with the blood, "blessed and holy," of witnesses to the Christian faith.

"That makes me very, very attached as a bishop, as a pastor, to this land," the archbishop said.

The archbishop visited the U.S. to raise awareness of the plight of Christians in Syria who are trying to sustain their faith community and very existence under the constant threat of death in the war zone.

He said he encourages Christians to stay in Syria in spite of the hardships of war, and said some progress had been made.

"This is very important to the new evangelization. We are called to stay in this country to bear witness to the Church, to Christ, to what we have been, and to those we have lost," he said.

When rocket-propelled grenades smashed Christian areas of the city during the Easter weekend and killed 14 people, his endeavor became an even greater challenge. Days before his talk in Braintree a shell hit the archbishopric, one of several to do so since the start of the war.

"This makes people scared. They are afraid of their future, and many tried to go out to get away. Myself, since the war began, I've tried to encourage them to stay, to remain, not to go away," he said.

He helped to create a program called Build to Stay, which is directed at providing people in Syria with a reason and means to stay in the country by working to unify Christians in Aleppo.

"I pray you to pray for us, and to do what you can to stop this war, to stop the violence, to let people get back to their lives, to give people confidence that they can live and continue to live in this country," he said.

He said he will not let the ancient Church in Aleppo disintegrate on his watch as archbishop.

"I will do what I can. I will fight. I will go everywhere. I will cry, and I will ask every single man of goodwill to give us help, to give us a hand, and to help us to stay in Syria," Archbishop Jeanbart said.

The Archdiocese of Boston with the Office for Ecumenical and Interreligious Affairs, the Greek Orthodox Metropolis of Boston, the Melkite Eparchy of Newton, Emmanuel Gospel Center, and the Massachusetts Council of Churches co-sponsored the talk.

Bishop Nicholas J. Samra of the Melkite Eparchy of Newton, which encompasses the U.S., spoke with The Pilot after the talk.

He said there is a concrete way people can directly aid the Christians of Aleppo.

"We have a diocesan account for Syrian relief for several years now. Up to this date we have sent over $300,000. It's open," Bishop Samra said.

He said anyone who wants to make a donation can give a check to the Diocese of Newton or the Eparchy of Newton, located at 3 Veterans of Foreign Wars Parkway in West Roxbury.

"We channel it every couple of months by wire transfers to where it's needed the most, to our patriarchate, to Aleppo, to Damascus, wherever it may be. So, if anyone wants to help on a financial level, beside the moral, spiritual and prayerful level, we're welcome to any donations," Bishop Samra said.

Dorchester priest Father Jack Ahern, who attended the talk, said the message of Archbishop Jeanbart needs to be heard by people in the U.S., particularly Christians.

Later that evening, Archbishop Jeanbart spoke as a guest at an ecumenical prayer service for the Armenian community on the centennial of the Armenian genocide of 1915.