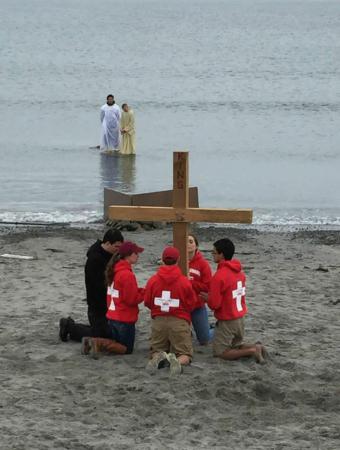 Students participate in a Good Friday prayer service at Short Beach in Nahant, which included a reenactment of Peter and Jesus walking on water and veneration of the cross. Pilot photo/courtesy St. Mary's High

NAHANT -- More than 300 students from St. Mary's in Lynn and other Catholic schools and parishes commemorated the conclusion of Lent with sacrifice, service and prayer at the annual Hunger for Justice retreat -- the largest service retreat in the Archdiocese of Boston.

"My first experience at St. Mary's was an invitation to participate in Hunger for Justice in 2012," said St. Mary's Head of School Grace Cotter Regan. "I had just accepted the invitation to join St. Mary's as the new head of school. I arrived at the beach to be welcomed by the campus ministry team and students. I was so moved by the experience of carrying the cross and prayer that I knew that I had been called to this amazing faith-filled community. The students inspire me with their altruism, service, faith and witness every day."

The retreat began on Good Friday with a noon prayer service at Short Beach in Nahant, including a reenactment of Peter and Jesus walking on water together.

Teens carried a cross to St. Thomas Church and recited the rosary along the way. They then participated in a Good Friday service and veneration of the cross.

"It really is an opportunity to enter into the Triduum -- the life, death, and resurrection of our Lord," St. Mary's School campus minister Andrea Alberti said.

Participants spent the rest of the evening at St. Mary's, where after one last meal students started a 30-hour retreat without food or technology. They participated in small group activities, watched the movie "The Passion of the Christ," spent time in prayer and slept on the gym floor in makeshift cardboard huts.

The next morning, they boarded buses to Boston to distribute food, socks and toiletry items to the homeless.

Also on Saturday, small groups went to different service projects in Lynn, Salem, Nahant, Beverly and Peabody. They worked in food pantries, did yard work, bagged sheets to be given away, and helped out in local homeless shelters and parishes. The retreat ended with an Easter Vigil Mass on the Lynn Common and a "Resurrection party" at which students broke their fast, with some items they had given up for Lent.

Hunger for Justice is coordinated by Alberti and religion teacher Chris Carmody, with help from nurse Lisa Morin-Plante, Pat Gill, executive assistant to the head of school, and religion teacher Michael McDuffee. Approximately 70 teen leaders also played a role in preparing for the weekend.

Graduates and parents were also involved as volunteers and chaperones. Participating teens -- more than half of whom are from St. Mary's -- raised money for charities through pledges. Since 2008, more than $500,000 has been raised.

"They're willing to give up food, and phones, and shelter. I think that's really good news for some of our older Catholics to hear that the Church is truly alive, and that when the challenge is put forth that young people will respond with action," Alberti said.