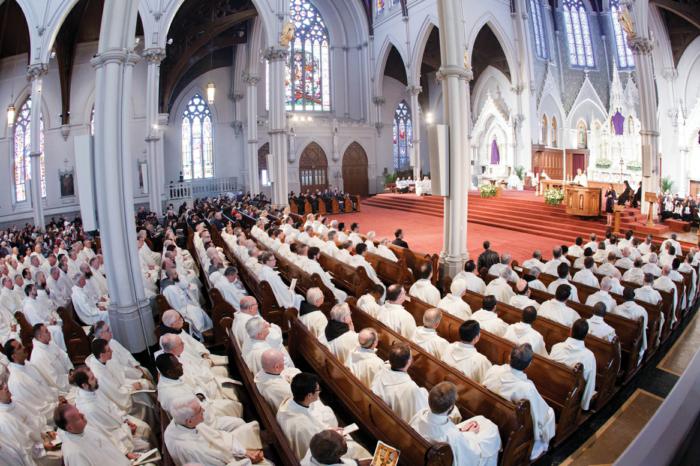 SOUTH END -- Priests of the Archdiocese of Boston joined Cardinal Seán P. O'Malley at the Cathedral of the Holy Cross for the annual Chrism Mass, March 31, and gathered afterward at Cathedral High School to honor three of their own.

The Chrism Mass serves as a symbol of unity in dioceses throughout the Catholic world as, during Holy Week each year, the local bishop blesses the sacred oils used to administer sacraments for the coming year -- the oil of catechumens, the oil of the infirm and the sacred chrism.

During the Mass, seminarians carried urns with each of the sacred oils to the altar before Cardinal O'Malley blessed them for distribution to the presbyterate -- many of which attended the Mass and renewed their priestly vows before the assembled faithful at the celebration.

In keeping with a tradition of recent years and the theme of unity, the leader of the Boston Greek Orthodox Church, Metropolitan Methodios spoke to the priests and the cardinal as the Mass began. He looked forward to a day of unity between Orthodox and Catholics.

In his homily, Cardinal O'Malley welcomed priests to what he called the "annual oil change" of the archdiocese.

As he focused his message on locations mentioned in the Gospel, Cardinal O'Malley held up Nazareth as a place of formation crucial to the work a priest and Capernaum as the place where a priest undertakes his ministry.

"In Jesus' life, these two venues are so important to his identity and ministry: Nazareth and Capernaum. After Jerusalem, they are the cities most mentioned in the Gospels," he said.

He spoke about the days Christ spent in ministry at the house of Peter in Capernaum, in the context of a vision of the Church under the current pope.

"I like to think of Peter's house at Capernaum as the field hospital Pope Francis speaks of. The Gospels tell us that the people brought the sick and suffering from miles around to the door of Peter's house," Cardinal O'Malley said.

He stressed that the life of a priest, who may not always see the results of his work in the community he serves, requires patience and can even include heartbreak.

"Our expectations, our hope for success, needs to be tempered by the conviction that one man sows and another one reaps. We cannot always have the consolation of the fruits of our labor. Our Capernaum can be tough. As I always say, being a Catholic in Boston is a contact sport. There can be a lot of heartbreak in Capernaum," the cardinal said.

The cardinal said three decades of life in Nazareth became an important preface for the public ministry of Jesus Christ.

"Nazareth is the place of Jesus' hidden life, an ordinary life, a place of family life, of prayer, of work, silent virtues, hospitality, friendship, routine, a banal repetition of simple chores and tedious tasks, it is also a place of community sharing both sorrows and joys," he said.

The cardinal said the priest must contemplate such a place in their internal lives.

"Nazareth is where our intimacy with the Lord allows us to embrace a simple lifestyle, celibacy, persevere in ministry, and confront failure. Nazareth is that oasis of prayer and spirituality without which it is impossible to cross the desert," he said.

The cardinal also spoke about his vision of the ongoing mission of the archdiocese.

"Our pastoral plan must underscore the importance of building communities that are indeed Christ's family. A priest must be a builder of unity in the family of the parish, connecting our people with God and with each other," Cardinal O'Malley said.

He raised the issue of encouraging vocations as a necessary and important aspect of pastoral ministry.

"It is the way we attend not only to the present pastoral needs of our people, but also the future needs of the community of faith," he said.

He said the place of prayer and contemplation must be continuously revisited and available in the life of a priest, even as he ages or retires.

"Nazareth and Capernaum need to be constants in the life of a priest. As we are living longer, we have another opportunity to spend more time in Nazareth, more time in adoration and prayer, so that like Aaron and Hur we can help hold up Moses' arms. Our prayer allows us to continue to contribute to the faith life of our Church," the cardinal said.

He reflected again on messages of the Holy Father to identify a virtue he said both places encompass.

"To me, Pope Francis' call to embrace the culture of encounter and the art of accompaniment is reflected in the virtue, common to the Nazareth and the Capernaum, that of hospitality," he said.

He said a priest must show that hospitality in his pastoral service.

He again touched on the virtue of unity represented in the oils the priests received after the Mass.

"Today's celebration is to remind us that we are not alone, that our priesthood unites us to Christ and to one another in a profound and permanent relationship," the cardinal said.

After the Mass, priests, bishops, deacons, and guests gathered in the gym of Cathedral High School to honor three priests.

"The only honest way to accept any kind of recognition is to frame it in the fact that I am one priest among many priests. Each of us shares in this ministry as we hope, on a good day, some facet of the love of the Lord be extended into this world," Father Murphy said, as he received a gift of recognition.

As Father Raeke received the honor, he recalled celebrating a recent Mass for prisoners and praying for a crying child in an ambulance on her way to the hospital. His prayer quelled her tears.

"In each of those instances, I came to realize that being a priest is being blessed, being greatly privileged, to say the words of Jesus Christ and to offer those to people. So, I can't imagine a better life. We all who have been called to the priesthood are abundantly blessed and greatly privileged to be able to serve the Lord," Father Raeke said.