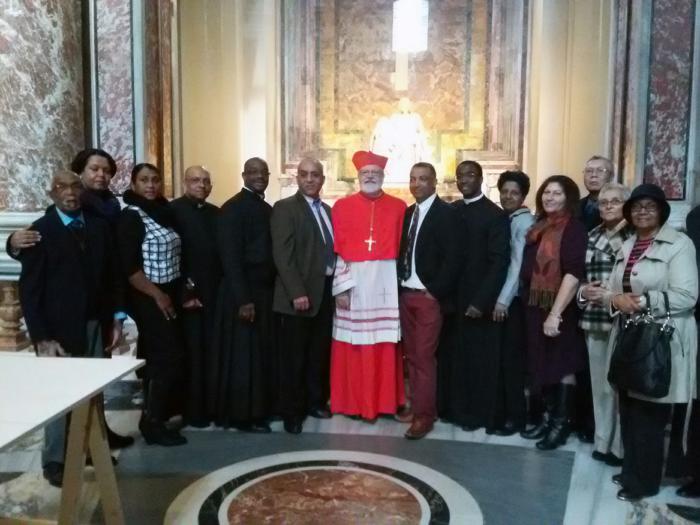 'With a group of the Cape Verdean community from Brockton. Last Saturday I had the great joy of being present as the Holy Father created 20 new cardinals from all over the world. Probably one of the biggest -- and most pleasant -- surprises in the naming of the new cardinals was Cardinal Furtado of Cape Verde.' Pilot photo/CardinalSeansBlog.org

Last Saturday (2/14) I had the great joy of being present as the Holy Father created 20 new cardinals from all over the world. Though several were from what would traditionally be a cardinalatial see, such as the Patriarch of Lisbon, many of the new cardinals are from areas where there has never been a cardinal before. ...I made sure to take pictures with the new cardinals who have significant immigrant populations here in Massachusetts. Probably one of the biggest -- and most pleasant -- surprises in the naming of the new cardinals was Cardinal Furtado of Cape Verde.

Monday (2/16) I was part of a press conference at the Pontifical Gregorian University to celebrate the opening of the Center for Child Protection, which had been in Munich and is now being relocated to the Gregorian. It will be able to train a number of people in Rome and they have already begun outreach to different countries -- particularly mission countries. Father Zoellner, who heads up that center, is also a member of the Pontifical Commission for the Protection of Minors. So, he asked me to be part of the press conference and also to give the keynote address at a public event and reception that took place later on at the Gregorian.

I spent Tuesday (2/17) traveling back to the states in time to be in the archdiocese for Ash Wednesday. As I always like to do, I celebrated the noon Mass at the Pastoral Center. As I said in my homily, St. Paul says that we are to be ambassadors of Christ and that God is going to speak through us. So, we must be aware that our mission is to be that ambassador of Christ -- to live his Gospel in such a way that we will attract other people who will want to live a life of discipleship because they see something in our lives that they also want to have. As the Holy Father has said so often, people will be converted, not by proselytism, but through attraction. Lent is a very important opportunity for us to renew our own baptismal life. It is a baptismal retreat, as we join in solidarity with all of those who are preparing to be received into the Church on Holy Saturday and as we prepare to renew our own baptismal promises. So, we live this baptismal retreat of Lent trying to have greater discipline, but also to grow in our friendship with the Lord and our commitment to live our mission to be ambassadors of Christ and evangelizers in today's world. This Lent is a very important moment in the life of the Church. The Mass at the Pastoral Center was standing room only. And I know that, despite the bad weather, horrible driving and difficult parking, the same was true in many of our churches and chapels. Even my sister, who was with us in Rome, was traveling back to Mexico and she called me to say how happy she was that she had been able to receive the ashes at the Atlanta airport Chapel! It is clear that Catholics were responding to this call to begin Lent. As I said in my homily, "Let's get cracking, Lent has begun!"